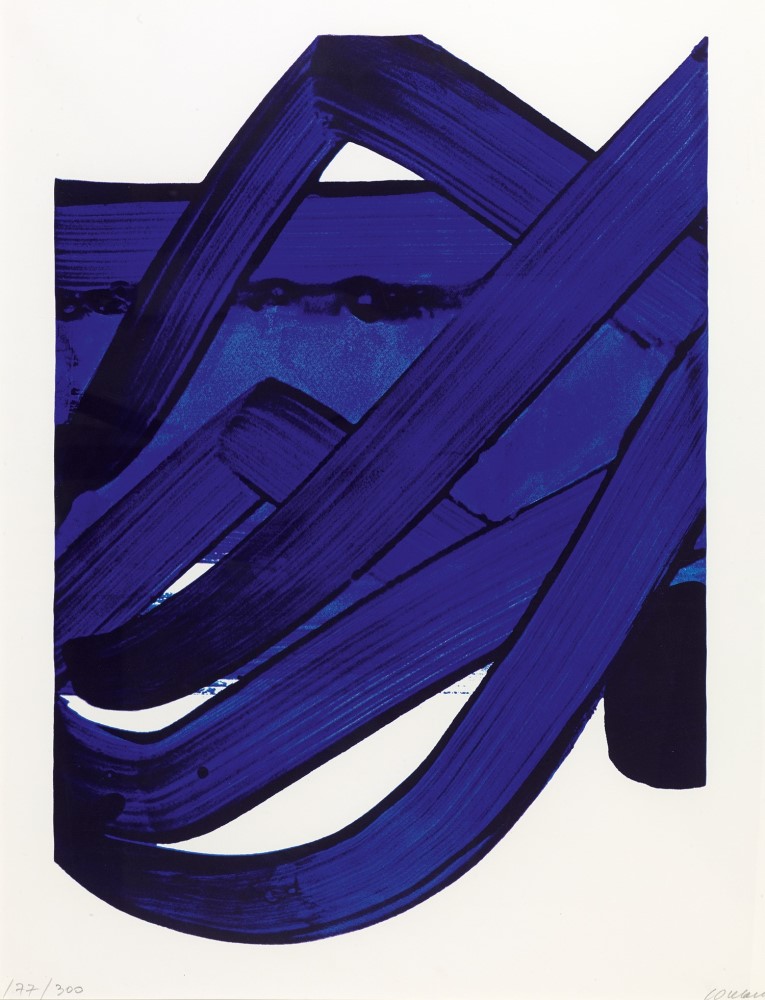 Screenprint created in 1988 for the Olympic games of Seoul.

Pierre Soulages is born on the 24 of December 1919. He is a French painter, engraver, and sculptor.

Born in Rodez, Aveyron, Soulages is also known as “the painter of black,” owing to his interest in the colour “both as a colour and a non-colour. When light is reflected on black, it transforms and transmutes it. It opens a mental field all its own.” He sees light as a work material; striations of the black surface of his paintings enable him to reflect light, allowing the black to come out of darkness and into brightness, thus becoming a luminous colour.

Before World War II, Soulages already had toured museums in Paris seeking his vocation and after wartime military service; he opened a studio in Paris, holding his first exhibition at the Salon des Indépendants in 1947. He also worked as a designer of stage sets.

In 1979, Pierre Soulages was made a Foreign Honorary Member of the American Academy of Arts and Letters. From 1987 to 1994, he produced 104 stained glass windows for the Romanesque Abbey church Sainte-Foy in Conques (Aveyron, France).

Soulages is the first living artist invited to exhibit at the state Hermitage Museum of St. Petersburg and later with the Tretyakov Gallery of Moscow (2001).

In 2007, the Musée Fabre of Montpellier devoted an entire room to Soulages, presenting his donation to the city. This donation includes twenty paintings dating from 1951 to 2006, among which are major works from the 1960s, two large plus-black works from the 1970s, and several large poly-tych.

A retrospective of his art was held at the Centre National d’Art et de Culture Georges Pompidou from October 2009 to March 2010. In 2010, the Museo de la Ciudad de Mexico presented a retrospective of Soulages’ paintings that also included an interview-video with the painter.