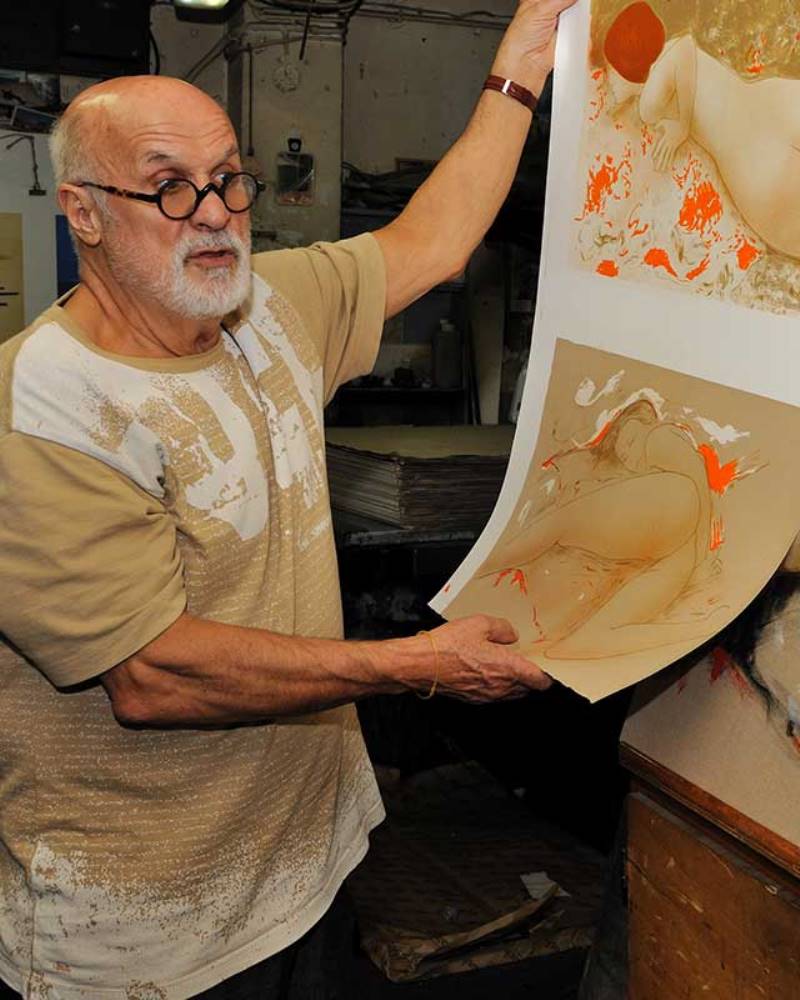 Photography of Alain Bonnefoit – Called the “Painter of Venus” by writer Hervé Bazin.

Alain Bonnefoit was born in Montmartre, Paris in 1937. He lives and works in Paris.

In 1953, Alain Bonnefoit is a student of the School of Applied Arts and Fine Arts in Paris and then enrolls in the Brussels School of Fine Arts in the “engravings and sculptures” section from 1959 till 1960. Back in Paris in 1963, he was a pupil and friend of the sculptor Antoniucci Volti as he approaches the female nude which became his favorite form of expression.

In 1963, Bonnefoit discovers Tuscany, a sweet and wonderful province whose seduction inspires his first landscapes.

However, he did not pursue this path because since 1964, he adopted a new form of expression which would really become his, the female nude.

His has first major exhibition in Paris in 1969, Avenue Matignon, at Jean Minet’s.

At the same time, Alain Bonnefoit is passionate about lithography. Even today, he continues to make all his lithographs himself, drawing on stone or zinc plate and assisting with all operations, from the first try to the last print.

Meanwhile he divides his time between Paris and Italy in Florence where he has set up his second workshop.

His first trip to Japan in 1975 marked him deeply.

Alain Bonnefoit discovers and deepens the Japanese technique of “Sumie”, of which we can say today that he has become “a master”. His successive meetings with very great Japanese artists, their universes all steeped in Zen thought, have matured the man and the work. Since then, he travels to Japan every year to improve his mastery of Sumie.

Alain Bonnefoit celebrates Woman, the nude, Beauty and Voluptuousness with such talent that it has become the benchmark for forty years. Alain Bonnefoit never tires of the full and loose curves offered by the female body without ever revealing its secrets.

Called the “Painter of Venus” by writer Hervé Bazin, Alain Bonnefoit enchants us with his art, conjuring up dreams, sensuality and eroticism.

Never falling into vulgarity, his work is dedicated to woman and her curves. For this highly talented artist – he is a drawer, painter, engraver, lithographer and sculptor – eroticism is above all refinement and sensuality, a state of mind and a way of life.

In 1991, the Hôtel de la Monnaie in Paris organized a prestigious presentation of 200 works: panorama of lithographs, watercolors, sumi-e, oils and sculptures. On this occasion, the Hotel de la Monnaie published a medal and a bronze signed A.Bonnefoit.

Bonnefoit’s distinctive style, with its characteristically sensuous and elegant depictions of the female form, embraces the use of oils, watercolours, crayon, ink and pencil.

Major retrospectives of Bonnefoit’s work have been held at the Marino Marini Museum in Florence as well as at museums in Korea and Germany. Examples of his work can be found in the French Government and the City of Paris art collections, the Boccaccio museum in Certaldo and the Kwan Ju Museum in Korea.