Linocut on rice paper by Isidore Van Mens – Titled: Entrance of the Fondouk, 1925 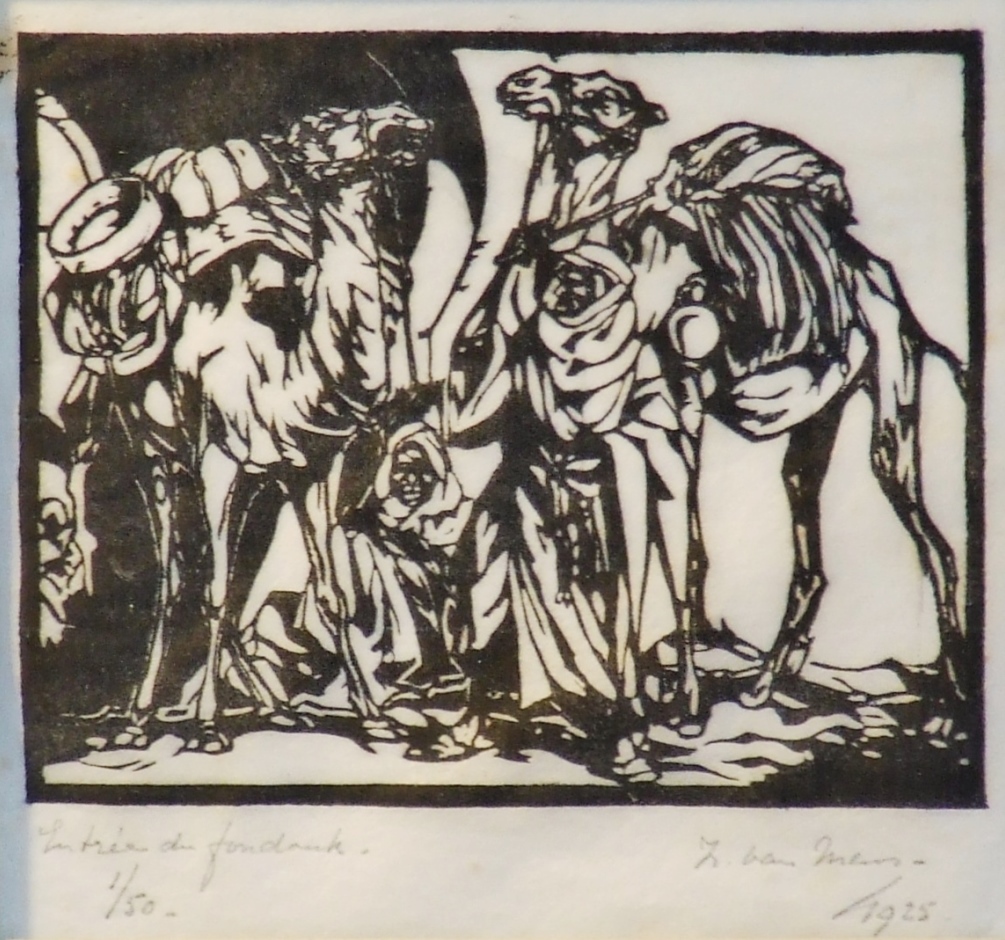 Artwork is framed and has some small brown oxidation stains on higher left.

Isidore Van Mens was born in Berlicum in 1890 and died in Oosterhout in 1985. He is a painter, draftsman, watercolorist and etcher of landscapes and figures. Isidore Van Mens is Dutch and his father, who became a lawyer, was Van Gogh’s fellow student in Zundert.

Considered for a long time as self-taught, but he was not, he did study painting at the same time as law because his father intended him to the bar. He decided otherwise and settled in Belgium where he lived for a long time in Casteau. He worked and made a career as an illustrator.

He traveled extensively and toured China with stays in Beijing and Shanghai, as well as India, Indonesia and in 1928 a short stay in Bali. He brought back treasures that make his home and his studio, whose intimacy is poignant, a veritable museum.

He has kept a particular predilection for the closer regions and for countries of sun and light: like Spain, Tunisia, Morocco and Algeria.

In 1923 he made his first of several trips to Tunisia and then in 1926 he visited Algeria and Morocco. In 1930 he left for Algeria again and painted several works in the regions of Constantine, Bou-Sâada and especially in Ghardaîa.

His orientalist paintings and watercolors, much appreciated by a wealthy bourgeois clientele, are exhibited among the great French orientalist artists.

His works are featured in several museums including that of Schaerbeek and Mons as well as in France. He will remain in the history of painting in Belgium as a great orientalist, despite his Dutch origins.

His works with themes as: landscapes and scenes of everyday life in Indonesia and Bali are sought after by collectors in the Netherlands and South East Asia.

His works are also rediscovered and collected with enthusiasm in the Maghreb countries where his works are in very important private collections as well as in the Middle East countries.