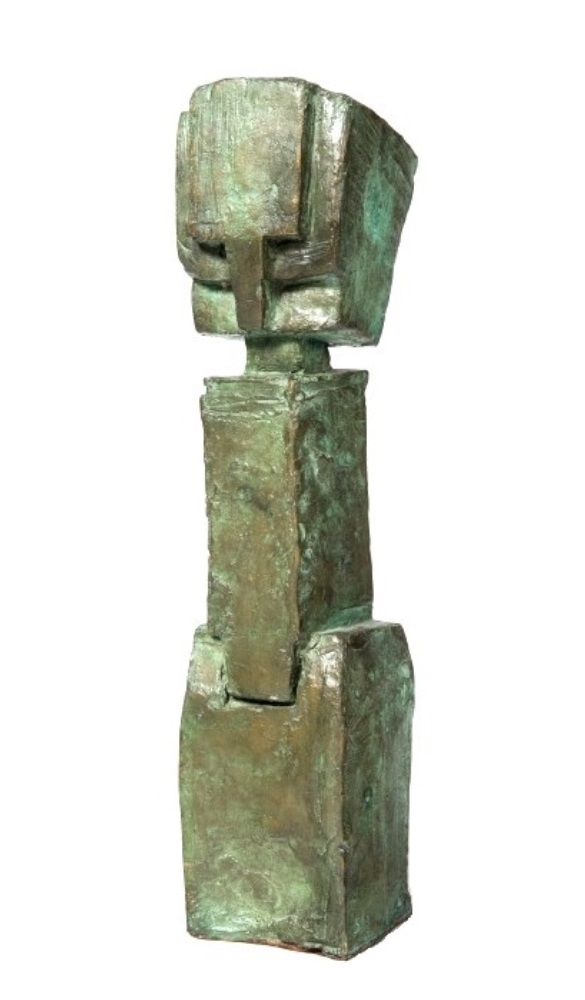 Antoine Mortier was born in Saint-Gilles, Brussels on October 2, 1908 and died in Auderghem, Brussels in January 1999. He is a Belgian draftsman, painter and sculptor.

He studied at the Brussels Academy and is the father of Marcel Mortier. In his early days he mainly painted seascapes, still lifes and compositions with characters. His works can be described as abstract expressionist and a form of non-lyrical figuration.

He is self-taught in painting, but follows courses in modeling and decorative sculpture at the Academy of Saint Job and Brussels. He has worked in various trades since his adolescence: ornamental tailor, furrier, chorister at the Royal Theater of La Monnaie, and framer. He became briefly member of the Jeune Peinture Belge in 1946. (Young Belgian Painting)

At the age of fifteen, he became an apprentice in an ornamental sculpture workshop. On the advice of his employer, he enrolled at the Academy where he took courses in modelling, perspective and drawing from the classical antiquity.

He worked as a furrier while taking evening sculpture lessons at the academies of Saint-Josse-ten-Noode, then Saint-Gilles. The painter Henry Ottevaere encourages him to paint. He will also attend classes at Edgard Tytgat’s free workshop.

In 1940, he became a chorister at the Théâtre de la Monnaie. He continues for seven years to exercise, in the morning, the profession of furrier while following the rehearsals in the afternoon. Numerous drawings, including those of his chorister’s lodge, charcoal nudes and live sketches bear witness to this period. Le Pain noir from 1944, The bottles from 1946. His compositions with forms surrounded by a black outline are not unrelated to the expressionism of Laethem-Saint-Martin or Georges Rouault. He exhibited at the 1944 and 1945 Salon Apport organized by Robert Delevoy.

Put in contact by the director of La Monnaie with the Apollo gallery and the group of Young Belgian Painting, he will be among their members, with whom he will exhibit collectively in Paris and Amsterdam. He will quickly resign from the group following the stranglehold of the French and his refusal of any compromise.

He left La Monnaie and now devoted all his time to painting. Brushed in broad strokes, his Indian ink washes from those years express the gradual transition from figuration to abstraction.

“Recumbent Blue Figure” is the painting from which it is linked to Action painting. At that time, Action painting and abstract expressionism were still unknown in Belgium and caused criticism to be misunderstood. This misunderstanding will further accentuate his inner revolt

If he has been compared to Franz Kline or Pierre Soulages, he nevertheless stands out because for him the gesture is not everything, but the incarnation of a starting subject which is “analyzed, reinvented, and synthesized until to the rigor of the sign”.

Material reasons prevented him from settling in Paris, at the invitation of the great dealer and collector Daniel-Henry Kahnweiler!

He will even have to work as a worker for a framer to survive:

Antoine Mortier worked in 1953 on behalf of the architect Willy Van Der Meeren on the coloring of apartments in social buildings in Evere.

Antoine Mortier benefited from two artist residencies respectively in 1962 and 1964 on Isola Comacina at Lake Como in Italy.

In 1983-1984, on behalf of the Brussels public transport network STIB, he created two steel high reliefs to the glory of the 14-18 War for the Yser station which were inaugurated in 1988, on the day of his eightieth anniversary.

In 1986, the Royal Museums of Fine Arts and le Palais des Beaux-Arts (the Palace of Fine Arts) devoted a second retrospective to him, the first presenting pictorial works, the second, larger wash drawings and gouaches which caused controversy in the artistic press in the 1950s. These two events allow the official recognition of a masterly work.

Antoine Mortier reveals the full extent of his power in oil and India ink. Black plays a structuring role and combines, or contrasts depending on the case, with a palette of bright colors. Monumental formats are frequent, favoring the vigor of the gestural deployment.

The press is positive and for the public, it’s a discovery.

Antoine Mortier died in 1999 at the age of 90. Several exhibitions have been organized in Belgium and France to pay tribute to him.