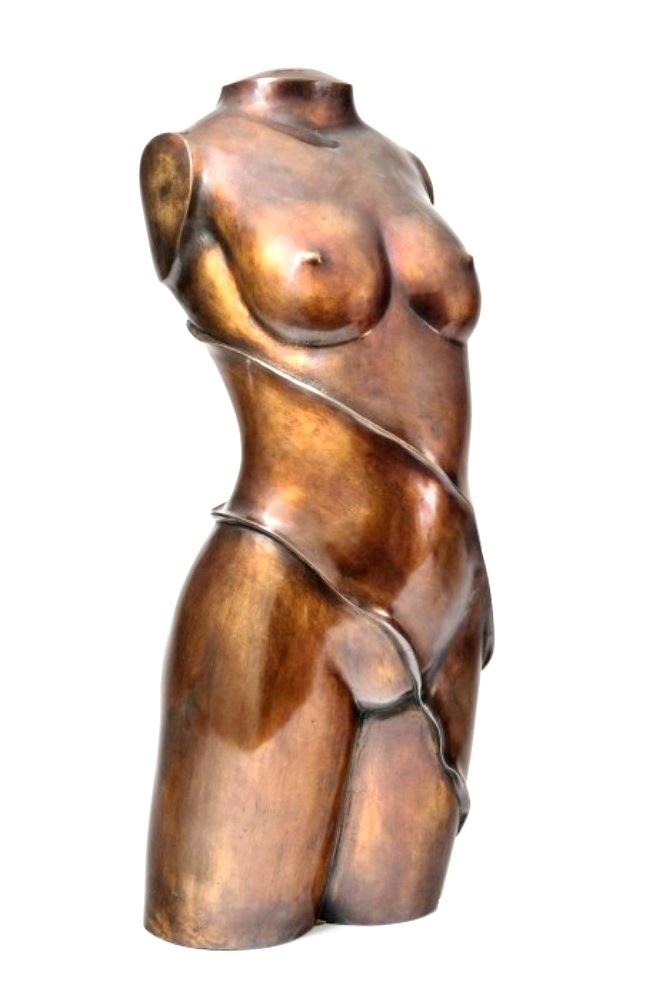 Original sculpture by Emiel De Block – Torso of a woman

Emiel De Block was born in Berlare on February 17, 1941. He is a Belgian sculptor with both figurative and abstract work.

In 1977 he received a grant from the Ministry of Culture and in 1978 he became a laureate of the Cultural Prize S. De Lathauwer sculpting. The following year he won second prize in Tribute to Jacob Jordaens competition, Antwerp, and in the Belgica 150 sculpture competition. He was also selected for the 15th International Exhibition of Sculpture Fondazione Pagani, Legnano, Milan. That same year he won the National Sculpture Competition August Vermeylen in Ostend.

Works by the sculptor were purchased by both the Ministry of the Flemish Community and the province of East Flanders. Works by De Block can also be found in art collections at home and abroad.

In Emiel De Block’s world of nature images, the female figure predominates. This sculptor wants to recreate the feminine forms through a subtle abstraction into forms of beauty.

The special thing about this is that he abstracts without falling into abstraction, unless exceptional, which he then experiences as a fascinating game. He frees the forms from their existential appearance to recreate them into a completely new existence, reducing nature to purely sculptural values. Often the images radiate an intimate sensitivity, not to say tenderness. It is also typical that the sculptor experiences the affinity of the various arts very deeply. In music and poetry he discovers similarities with his work. If in his figurative works sculpture has become a music that has become silence and music a sculpture that has become melodious, then in his more abstract works it is the affinity with poetry that comes to the fore. The latter is especially apparent in the mostly columnar works that were made for the exhibition “Language of Stone, Silence of Paper” where the images are related to the content of the poems and which were materially connected to the sculptures, as the poet engraved his work in plastic form.