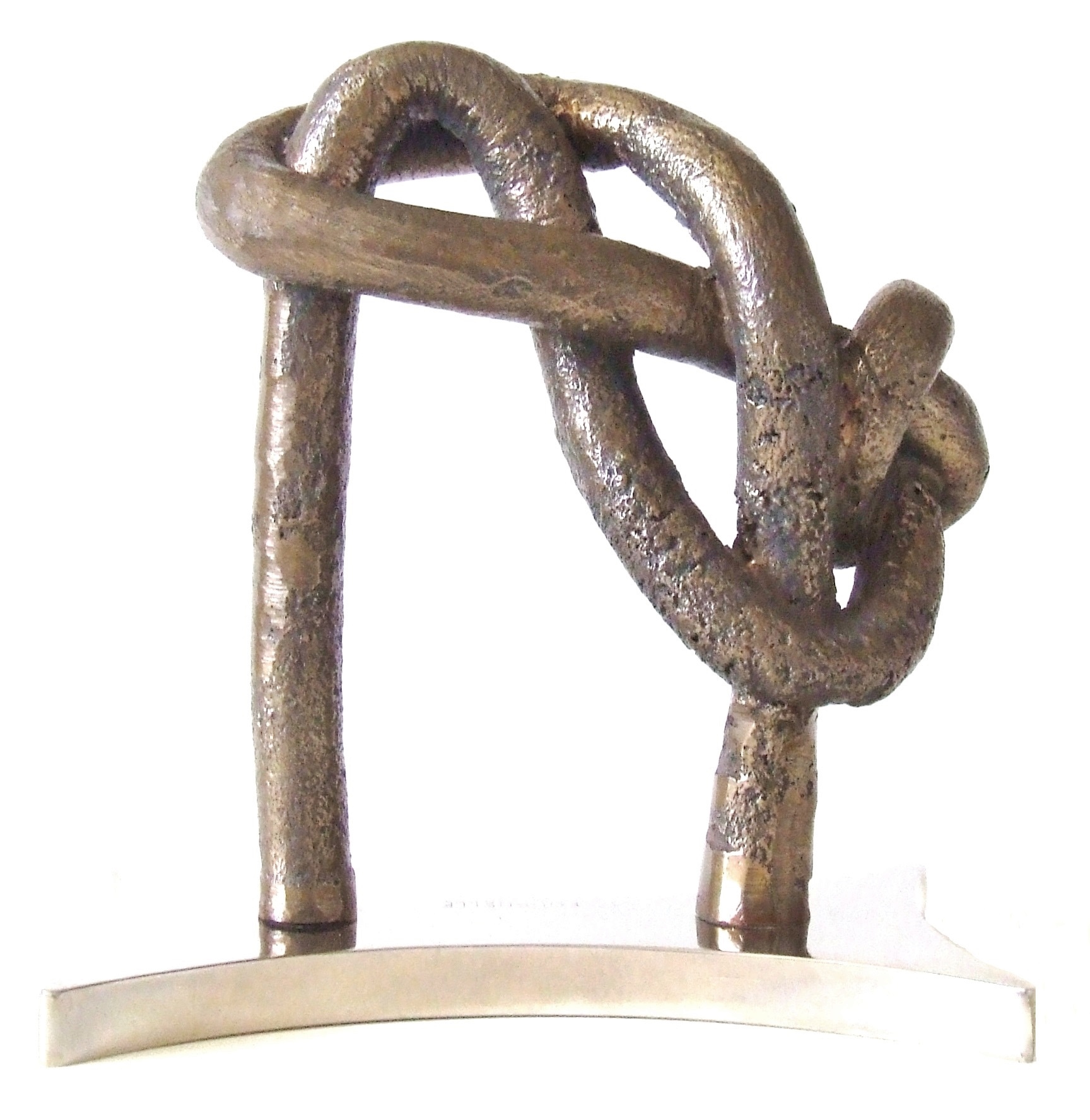 Solid bronze sculpture with gold patina on steel base signed on upper side of the base.

Edition: This is an unique piece.

Price: *$ CAD (Canadian dollars) For more information on artist or his artworks Contact gallery. Other artworks by André Fournelle are available at the gallery and not necessarily shown on our website.

A work in an industrial foundry in Montreal awakened his interest in the molten metal that will become the basis for many of his works. In 1967, he set up an experimental foundry in Pierrefonds, where he works along side Pierre Leblanc and Armand Vaillancourt. He began the following year, accompanied by Marcelle Ferron, a study trip to Europe in search of new alloys between glass and metal.

André Fournelle, is born in 1939 in Hull, UK; He is a Canadian sculptor living in Quebec. Born in England, André Fournelle is war orphan and adopted in Canada at the age of one year.

On the sidelines of institutional frameworks for teaching art, André Fournelle made his artistic learning through reading, research and various experiments. He began exhibiting sculptures in 1963. A work in an industrial foundry in Montreal awakened his interest in the molten metal that will become the basis for many of his works.

In 1967, he set up an experimental foundry in Pierrefonds, where such work Leblanc and Pierre Armand Vaillancourt. He began the following year, accompanied by Marcelle Ferron, a study trip to Europe in search of new alloys between glass and metal.

From 1970 to 1973, he runs workshops in schools with a mobile foundry to allow students to make works of cast metal. A work on the experimental foundry is published in 1973 and presents a synthesis of its work. He is also part of the EAT (Experiment in Art and Technology) group founded by American artists Robert Rauschenberg and Robert Whitman.

During a trip to England in 1979, André Fournelle discovers rugged fences that will inspire him a series of works and performances: states of shock. His installation Passage, presented at the Musée d’art contemporain de Montréal in 1983, is inspired by the ruins of the Parthenon in the context of debates on the recovery of the heritages plundered by other countries.

In 1989, he installed an imposing spiral-shaped neon structure in the desert of the Valley of Death from the perspective of the artists of Land Art and the installation of Robert Smithson, Spiral Jetty.

The spiral is installed on the very premises where Robert Smithson, July 20, 1973, died in a plane crash. The following year, he exhibited Resecare in a gallery and proposed a course on oscillating metal plates suspended from cables.

It is in 1997 that Fournelle has the idea of an intervention under the Pont des Arts in Paris. He proposed to illuminate the work by installing a line of fire, thus triggering a controversy.

In September 1998 in Trois-Rivières, Qc, he realized a line of fire on the Saint-Maurice River between two pillars of a boom in honor of the dead draftsmen guiding the logs.

He insisted for three years to obtain the authorizations for the project that finally saw the light in 1999, with the collaboration of a team of pyrotechnic specialists and the art historian Pierre Restany.

For Fournelle, it is a matter of magnifying the structure and forms of the bridge after dark and of recording on film the images of this ephemeral intervention that recalls those of Christo. Light and silence is one of André Fournelle’s most spectacular works.

In 2005, he made a performance during the Incendiaries event where he burned colored coal on steel bed carcasses, while actors recited names of deceased homeless people.

As a multidisciplinary creator practicing sculpture, drawing, engraving and performance, André Fournelle has also established himself through his research combining art and technology.