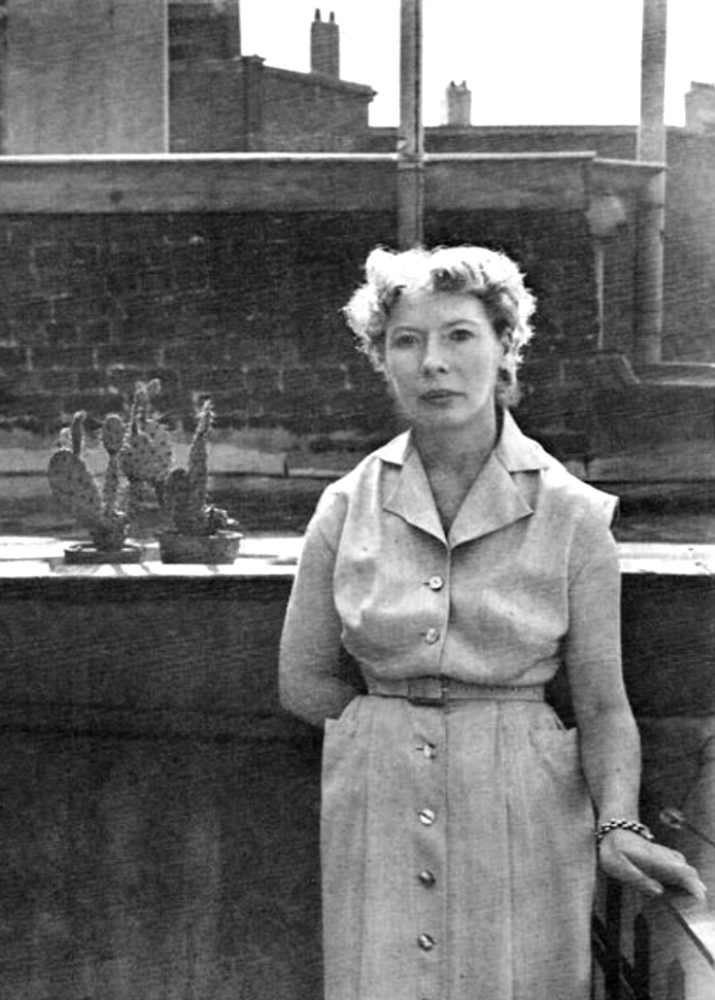 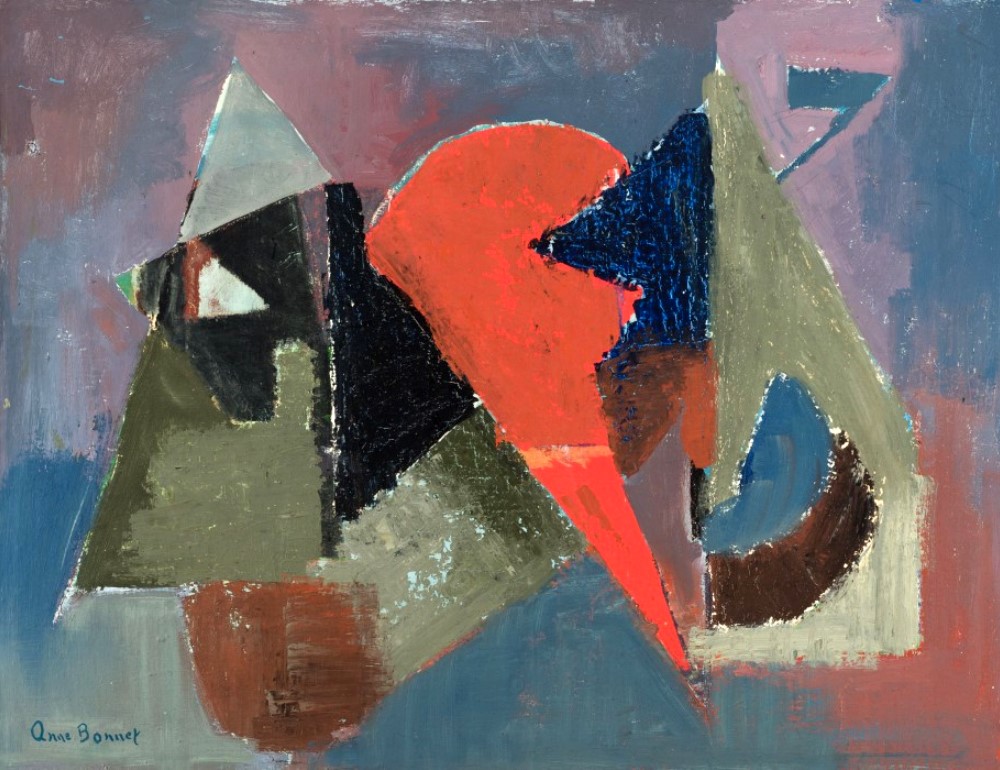 Photography of Anne Bonnet circa 1950.

Anne Bonnet, was born on May 16, 1908 in Brussels and died on November 14, 1960 in that same city. She is a Belgian painter who first painted in an animist style. After 1950, she developed her own form of abstract painting. She co-founded the artists’ association La Jeune Peinture Belge and was a member of Kunst van Heden.

She was born Anna José Fanny Marie Louise Thonet and was the daughter of a jewelery sales representative from Liège who later started his own jewelery business. He died in 1923. From then on, Anne started taking evening classes in decorative and ornamental art at the Royal Academy of Fine Arts in Brussels. Her mother also died in 1926 and she was forced to finish her studies. In order to make a living, she worked for a photographer.

In 1930 she married Louis Bonnet, a silk representative from the French Lyon region. Thanks to her marriage, she was able to focus again on painting, initially as a self-taught figurative artist, mainly painting children’s portraits and port and city views.

From 1936 she attended the art academy of Sint-Joost-ten-Node under Jacques Maes. There she met Louis Van Lint and Gaston Bertrand, who became lifelong friends. In 1938, Anne, who since her marriage painted under the name of her husband, left the academy. The three friends painted in an animistic style in opposition to the emerging surrealism and exhibited together for the first time that year. In 1939 they founded the artists association La Route Libre together. Two years later, the three were also involved in the founding of the Apport group, with art critic Robert Delevoy as the driving force and, among others, Mig Quinet joining. The first exhibition of this group took place at the Center for Fine Arts in Brussels in 1941. At that time she met Edgard Tytgat under whose influence she switched to expressionism.

In 1945 she was one of the co-founders of the artists’ association La Jeune Peinture Belge, together with Pierre Alechinsky, Gaston Bertrand, Jan Cox, Jules Lismonde, Marc Mendelson and Louis Van Lint, among others. Their style evolved from post-expressionism to all kinds of abstract art. From 1951, Bonnet was also a member of the artists’ association Kunst van Heden.

Influenced by the painter Jean Brusselmans and inspired by Piet Mondriaan and Paul Klee, she came up with a soft abstract painting with a very poetic atmosphere, in which she used many shades of gray and ocher, mixed with soft shades. From 1950 Bonnet exhibited regularly at home and abroad, including in 1951 and 1953 at the Center for Fine Arts in Brussels, in 1951 in Liège, in 1953 in Antwerp, in 1954 in Paris and Berlin and in 1957 in Aachen. Her work was selected for documenta II, which took place in 1959 in Kassel, Germany. Her work was also selected for the Venice Biennale of 1948 and 1956 and the São Paulo Biennale of 1953.

Bonnet died at the age of 52 after a long illness. Various retrospective exhibitions were organized: in 1963 in the Center for Fine Arts in Charleroi and in the Liège Museum of Fine Arts, in 1975 in the Malou Castle in Woluwe-Saint-Lambert and in 2000 in Braine-l’Alleud.

Oil on canvas laid on wooden panel signed on lower left and titled, dated and signed again on verso.

Not available any more!. Thank You.