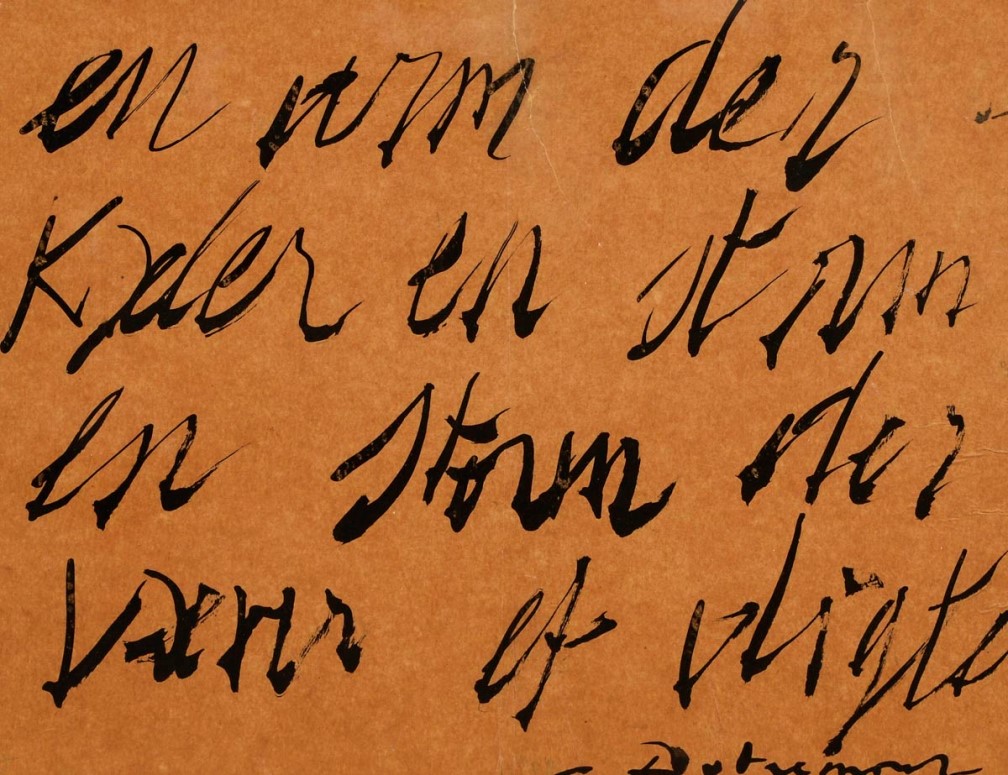 Ink on cardboard by Christian Dotremont; Logogram inspired by a Danish poem

Silkscreen on paper according to a logogram of Christian Dotremont Titled: Always remains to my dream – edition 2004

Christian Dotremont was born on 12 December 1922 and died on 20 August 1979; he was a Belgian painter and poet born in Tervuren, Belgium. He was a founding member of the Revolutionary Surrealist Group in 1946 and he also founded Cobra together with Danish artist Asger Jorn, Belgian artist Pierre Alechinsky and Dutch artist Karel Appel, just to name a few. He later became well known for his painted poems (French: Peinture mots), which he called logograms.

With logograms, Dotremont invents a new writing system and he happens in this way, to link writing and painting in a single composition. That’s the origin of the name painter of writings. The logograms are spontaneously painted poems that tend to distort the letters of the Latin alphabet.

By the spontaneity of the gesture that leads the brush stroke of ink, Dotremont manages to personalize the alphabetic writing. This has the effect of accentuating the plasticity of the scriptural signs. For Christian Dotremont, one should not be able to read his logograms but rather see them in their graphic, material dimension. The text of the logograms is found underneath, in pencil, in regular writing. This allows us to understand its meaning, but only after seeing it.

Between 1962 and 1979, Dotremont collected a number of logograms in albums and also produced long continuous logograms for publication: Like in Logbook, 1974, J’écris donc je crée, 1978 (I write so I create) and Logbookletter, 1979.

In 1951, he suffers from tuberculosis, just like his friend Jorn. That’s one of the events that put an end to the CoBrA movement that same year.

This disease, which he calls “catastrophe”, will profoundly change his vision of things.

He spent a few months in sanatoriums in Silkeborg and Buizingen to fight the disease.

He died of tuberculosis in Tervuren.