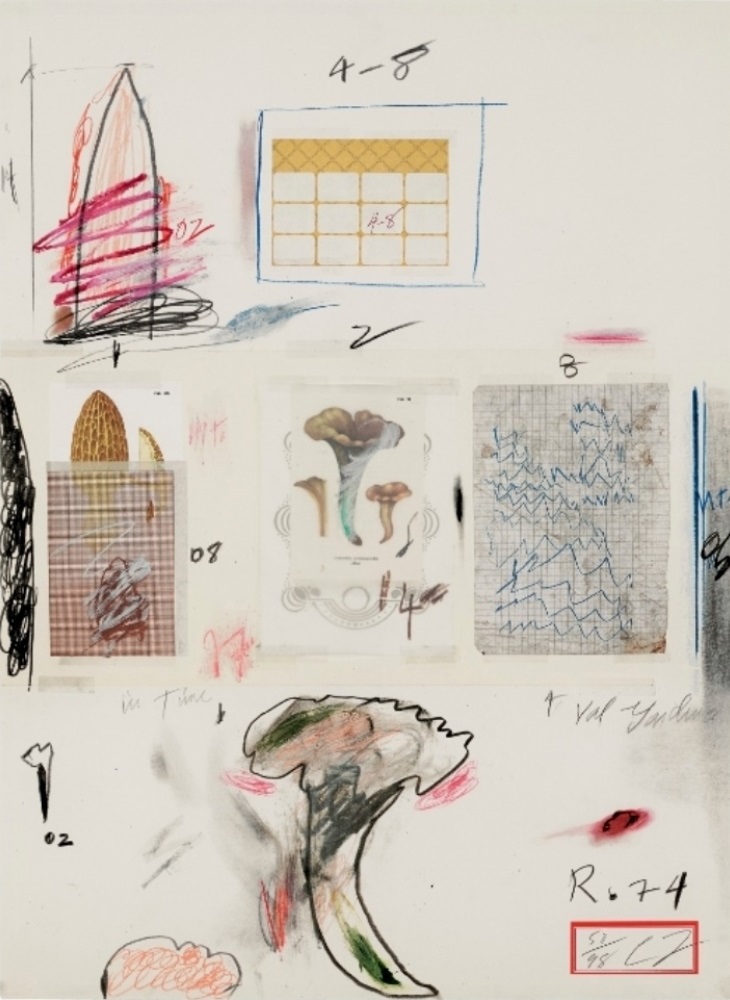 Mixed media lithograph in colors build up with grano-lithograph, photochrome and collotype techniques as well with collage and hand-coloring in crayon on Rives Couronne paper signed in pencil with initial and numbered on lower right. One of an edition of 98 signed and numbered lithographs.

For more information on artwork or artist contact gallery

Note: From Natural History is a portfolio of ten prints printed on Rives Couronne Paper (except for III on Richard de Bas paper). The prints are mixed media technique of colour lithography, grano-lithography, collotype and photo-chrome with collage and drawing by the artist. The portfolio is from an edition of 98 with 17 artist’s proofs and 1 printer’s proof that has been printed at the Mattieu Studio in Zurich in the summer of 1974. Each print is signed and numbered by the artist and embossed with the printer’s sign. The ten prints in each portfolio are marked with an embossed number from I-X.

Twombly was born in 1928 in Lexington, Virginia, and studied art in Boston and New York and after that at Black Mountain College in North Carolina in the early 1950s. Although he was a contemporary of Robert Rauschenberg and Jasper Johns, his work soon digressed from the aims of American postwar abstraction.

As Cy Twombly continued to work in various locations over the following decades; such as and including Rome, Lexington, and his final residence, in Gaeta, Italy, these places, landscapes, and natural forms came to figure prominently in his drawings, collages, photographs, and watercolors.

For Twombly, the poetic and the rational were not mutually exclusive.  Collage, which engaged him briefly in 1959, but finally began to appear more regularly in 1971, allies Twombly to the Dadaists and their descendants, such as Rauschenberg and Johns.

Visual information from everyday life, travel postcards, reproductions of paintings, scientific illustrations, and personal drawings entered his work as a way to explore the potential of both structure and meaning.

From his student days on, Twombly also captured his daily life in photographs. He recorded the verdant landscapes of Virginia and the coasts of Italy; close-up details of ancient buildings and sculptures; studio interiors; and still lifes of objects and flowers.

Beginning in the early 1990s, he used specialized copiers to enlarge his Polaroid images on matte paper, resulting in subtle distortions that approximate the timeless qualities of his paintings and sculptures.

In 2010 Twombly was selected to install a permanent work at the Louvre: a painted ceiling for the Salle des Bronzes. The Ceiling spans 3,750 square feet (350 square meters) and pays homage to the greatest Hellenic sculptors, from Phidias to Praxiteles, each of their names inscribed over an immense blue sky populated by floating, cosmic orbs.

In 2011, Twombly died in Rome after being hospitalized for several days; he had had cancer for many years. A plaque in Santa Maria in Vallicella commemorates him.

His paintings of large-scale, freely-scribbled, calligraphic and graffiti-like works on solid fields of mostly gray, tan, or off-white colors are in the permanent collections of most of the museums of modern art around the world, including the Menil Collection in Houston, the Tate Modern in London or the New York’s Museum of Modern Art

AA-Graphic arts
Etching in colors on paper by Damien Hirst – Titled: Renewal, 2009
Accumulation of rubber stamps in wooden box by Arman – Created in 1973