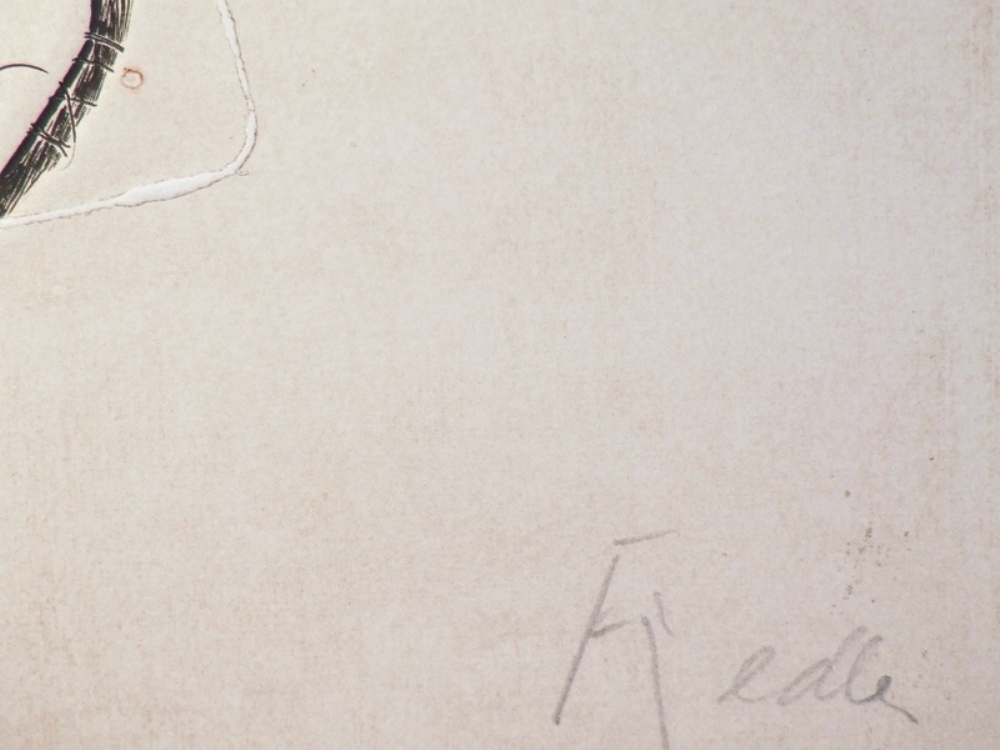 In addition to painting, Fiedler will experiment for many years with the resources of etching, using new techniques to give the print a density, a relief that gives it a special “dramatic” intensity.

François Fiedler was born in Košice, Hungary in 1921 and died in Saint-Germain-Laval, Seine-et-Marne, France in 2001. He was a Hungarian-born naturalized French painter.

One of the vitally and important artists in the Aimé Maeght stable that included Marc Chagall, Giacometti and Joan Miró, was certainly François Fiedler. Fiedler’s life and art was chronicled in many books and journals, including Collection de la Fondation Maeght.

After receiving a Masters in Fine Arts degree from the Academy of Budapest, François Fiedler moved to Paris with his first wife in 1946.

One day while looking at a pot of house paint, crackled by the sun and making such beautiful designs, he decided to reproduce this process on canvas. After this he never made any more figurative paintings, finding so many forms of expression in this new technique.

The great artist Miró saw one of these in a corner of a little gallery and was amazed by it. He decided to find the artist and so met Fiedler. They became close friends, and Miró presented François to the famous gallery and art dealer Aimé Maeght. Now he was connected with some of the greatest creators of the time, all managed by Aimé Maeght. He became close with Giacometti, Braque, Cesar, Ubac, Tal-Coat, Miró, Chagall, and so many other artists of this era.

When Fiedler died in 2001 he left behind a large and diverse body of work, including scores of oil paintings ranging from 5 meters across to well over 2 meters, monotype prints, lithographs and etchings.

François Fiedler remains an artist recognized in the world of art but unknown to the general public despite the importance of his work.