Ink drawing on paper by Alberto Giacometti – Sketch of a figure 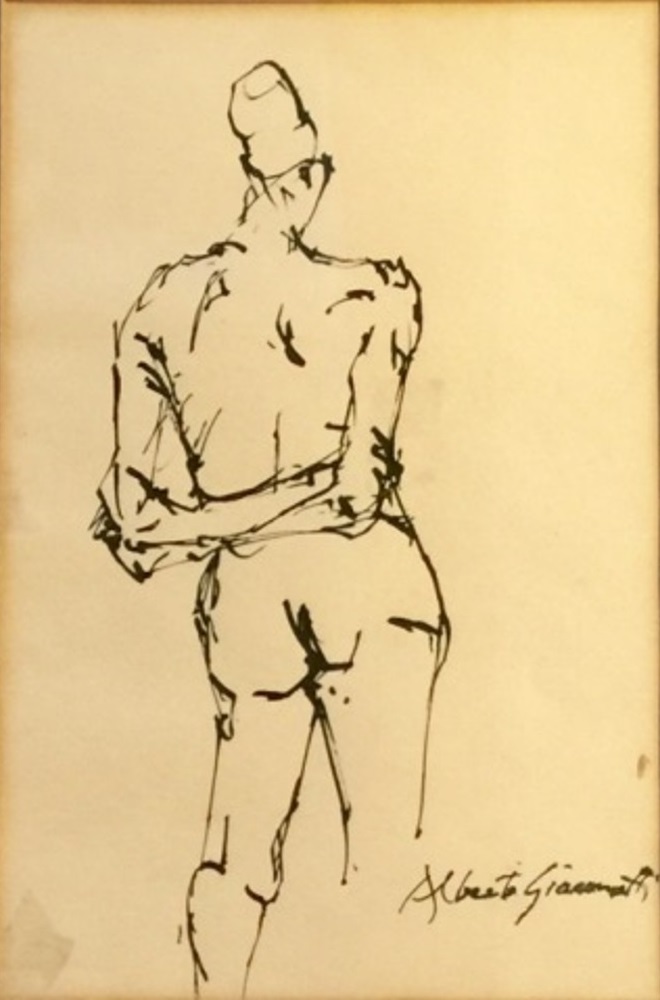 Original artwork on paper by Alberto Giacometti; Sketch of a figure

Ink drawing on paper fully signed on lower right by the artist.

Condition: Artwork has stains and time ware browning on edges but its condition is overall good

Price in *US Dollars

Artwork is sold!!! Thank you.

Giacometti was born in Borgonovo, now part of the Switzerland municipality of Bregaglia, near the Italian border. He was a descendant of Protestant refugees escaping the inquisition. Alberto attended the Geneva School of Fine Arts. His brothers Diego (1902–85) and Bruno (1907–2012) would go on to become artists as well. Additionally, Zaccaria Giacometti, later professor of constitutional law and chancellor of the University of Zurich, grew up together with them, having been orphaned at the age of 12 in 1905.

In 1922, he moved to Paris to study under the sculptor Antoine Bourdelle, an associate of Rodin. It was there that Giacometti experimented with cubism and surrealism and came to be regarded as one of the leading surrealist sculptors. Among his associates were Miró, Max Ernst, Picasso, Bror Hjorth, and Balthus.

Between 1936 and 1940, Giacometti concentrated his sculpting on the human head, focusing on the sitter’s gaze. He preferred models he was close to—his sister and the artist Isabel Rawsthorne (then known as Isabel Delmer). This was followed by a phase in which his statues of Isabel became stretched out; her limbs elongated. Obsessed with creating his sculptures exactly as he envisioned through his unique view of reality, he often carved until they were as thin as nails and reduced to the size of a pack of cigarettes, much to his consternation. A friend of his once said that if Giacometti decided to sculpt you, “he would make your head look like the blade of a knife”. After his marriage to Annette Arm in 1946 his tiny sculptures became larger, but the larger they grew, the thinner they became. Giacometti said that the final result represented the sensation he felt when he looked at a woman.

His paintings underwent a parallel procedure. The figures appear isolated and severely attenuated, as the result of continuous reworking. Subjects were frequently revisited: one of his favorite models was his younger brother Diego Giacometti. A third brother, Bruno Giacometti, was a noted architect.