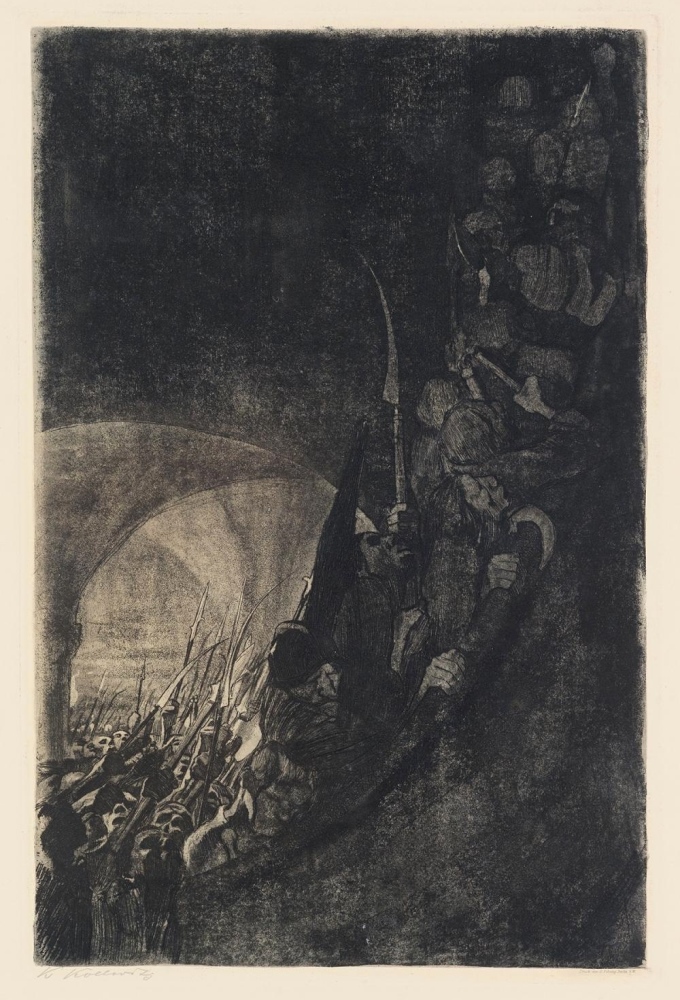 Dry-point engraving and soft ground etching on wove paper signed on lower left in pencil by the artist and inscribed in plate with the printers name on the right corner. One of a seventh state of probably 10 pencil signed etchings.

Käthe Kollwitz, née Schmidt on the 8 of July 1867 in Königsberg and died on 22 of April 1945 in Moritzburg. She was a German artist and expressionist printmaker, draftsman, and sculptor. She trained initially as a painter, but by 1890 turned to printmaking as means for social criticism. At sixteen she began working with subjects associated with the Realism movement, making drawings of working people, sailors and peasants she saw in her father’s offices. Wishing to continue her studies at a time when no colleges or academies were open to young women, Kollwitz enrolled in an art school for women in Berlin. There she studied with Karl Stauffer-Bern, a friend of the artist Max Klinger. The etchings of Klinger, their technique and social concerns, were an inspiration to Kollwitz.

In 1888, she went to Munich to study at the Women’s Art School, where she realized her strength was not as a painter, but a draughtsman. At the age of seventeen, Kollwitz became engaged to Karl Kollwitz, a medical student, while she was studying art in Munich. In 1890, she returned to Königsberg, rented her first studio, and continued to depict the harsh labors of the working class. These subjects had become an inspiration in her work for years

Married to Karl who became a physician to proletarian families in Berlin, she felt deep admiration for working class and dedicated her art to the poor and oppressed, especially women and children. Devastated by the death of her younger son, Peter, in combat in 1914, embraced pacifism and concentrated increasingly on themes of sacrifice and mourning. Stylistically indebted to Naturalism, but eventually began simplifying compositions, to emphasize emotion. She made a total of 275 prints, nearly all black and white and focused on etching until about 1911, then turned more to lithography, capitalizing on its directness.

She became the first woman elected to Prussian Academy of Arts in 1919; but expelled by Nazis, who prohibited her from exhibiting but nevertheless appropriated her images for their own propaganda. During World War II her Berlin apartment was destroyed, with great loss of her artworks.