Etching on paper by Georges Braque – Composition of a Still Life I, 1950 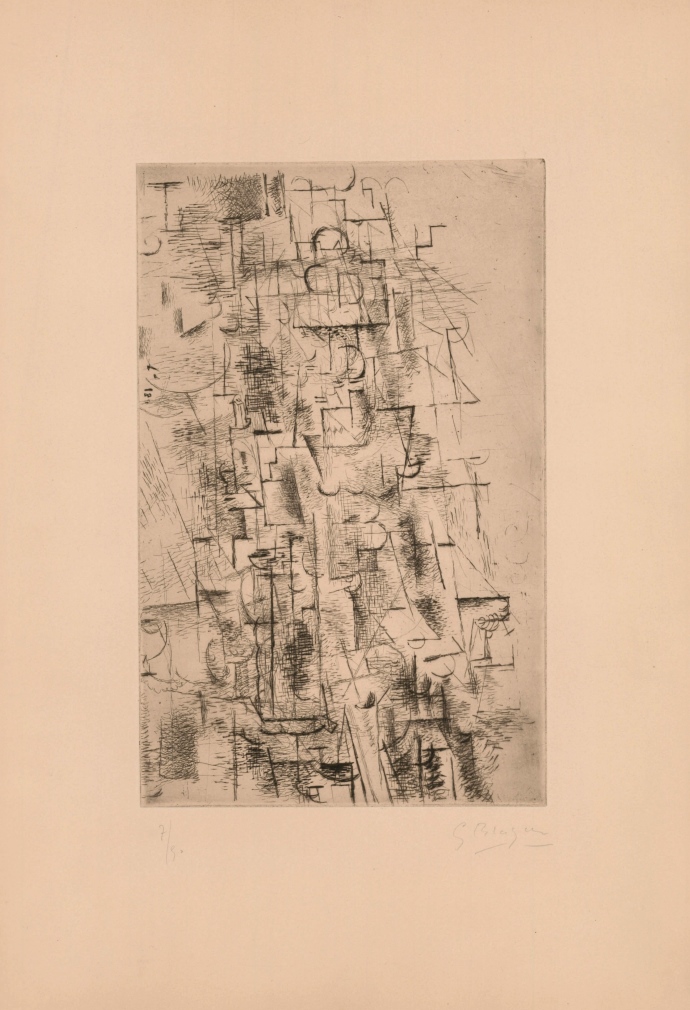 Limited edition fine art print by Georges Braque – Composition d’une Nature morte I, 1950 (Composition of a Still Life I) – Artwork was created in 1911 and edited in 1950 by Maeght.

Etching on paper signed in pencil by the artist on lower right and numbered on lower left. One of an edition of 50 signed and numbered etchings.

Price: For pricing or more information on artwork or artist contact gallery.

Georges Braque was born 13 May 1882 and died 31 August 1963. He was a major 20th-century French painter, collagist, draughtsman, printmaker and sculptor. His most important contributions to the history of art were in his alliance with Fauvism from 1905, and the role he played in the development of Cubism. Braque’s work between 1908 and 1912 is closely associated with that of his colleague Pablo Picasso. Their respective Cubist works were indistinguishable for many years, yet the quiet nature of Braque was partially eclipsed by the fame and notoriety of Picasso.

Braque’s earliest works were impressionistic, but after seeing the work exhibited by the artistic group known as the “Fauves” (Beasts) in 1905, he adopted a Fauvist style. The Fauves, a group that included Henri Matisse and André Derain among others, used brilliant colors to represent emotional response. Braque worked most closely with the artists Raoul Dufy and Othon Friesz, who shared Braque’s hometown of Le Havre, to develop a somewhat more subdued Fauvist style. In 1906, Braque traveled with Friesz to L’Estaque, to Antwerp, and home to Le Havre to paint.

Braque’s paintings of 1908 till 1912 reflected his new interest in geometry and simultaneous perspective. He conducted an intense study of the effects of light and perspective and the technical means that painters use to represent these effects, seeming to question the most standard of artistic conventions. In his village scenes, for example, Braque frequently reduced an architectural structure to a geometric form approximating a cube, yet rendered its shading so that it looked both flat and three-dimensional by fragmenting the image. He showed this in the painting Houses at l’Estaque.

Beginning in 1909, Braque began to work closely with Pablo Picasso who had been developing a similar proto-Cubist style of painting. At the time, Pablo Picasso was influenced by Gauguin, Cézanne, African masks and Iberian sculpture while Braque was interested mainly in developing Cézanne’s ideas of multiple perspectives. “A comparison of the works of Picasso and Braque during 1908 reveals that the effect of his encounter with Picasso was more to accelerate and intensify Braque’s exploration of Cézanne’s ideas, rather than to divert his thinking in any essential way.” Braque’s essential subject is the ordinary objects he has known practically forever. Picasso celebrates animation, while Braque celebrates contemplation. Thus, the invention of Cubism was a joint effort between Picasso and Braque, then residents of Montmartre, Paris. These artists were the style’s main innovators. After meeting in October or November 1907, Braque and Picasso, in particular, began working on the development of Cubism in 1908. Both artists produced paintings of monochromatic color and complex patterns of faceted form, now termed Analytic Cubism.

Braque resumed painting in late 1916. Working alone, he began to moderate the harsh abstraction of cubism. He developed a more personal style characterized by brilliant color, textured surfaces, and after his relocation to the Normandy seacoast, the reappearance of the human figure. He painted many still life subjects during this time, maintaining his emphasis on structure. One example of this is his 1943 work Blue Guitar, which hangs in the Allen Memorial Art Museum. During his recovery he became a close friend of the cubist artist Juan Gris.

He continued to work during the remainder of his life, producing a considerable number of paintings, graphics, and sculptures. Braque, along with Matisse, is credited for introducing Pablo Picasso to Fernand Mourlot, and most of the lithographs and book illustrations he himself created during the 1940s and ’50s were produced at the Mourlot Studios. In 1962 Braque worked with master printmaker Aldo Crommelynck to create his series of etchings and aquatints titled L’Ordre des Oiseaux (The Order of Birds), which was accompanied by the poet Saint-John Perse’s text.

Braque died on 31 August 1963 in Paris. He is buried in the cemetery of the Church of St. Valery in Varengeville-sur-Mer, Normandy whose windows he designed. Braque’s work is in most major museums throughout the world.