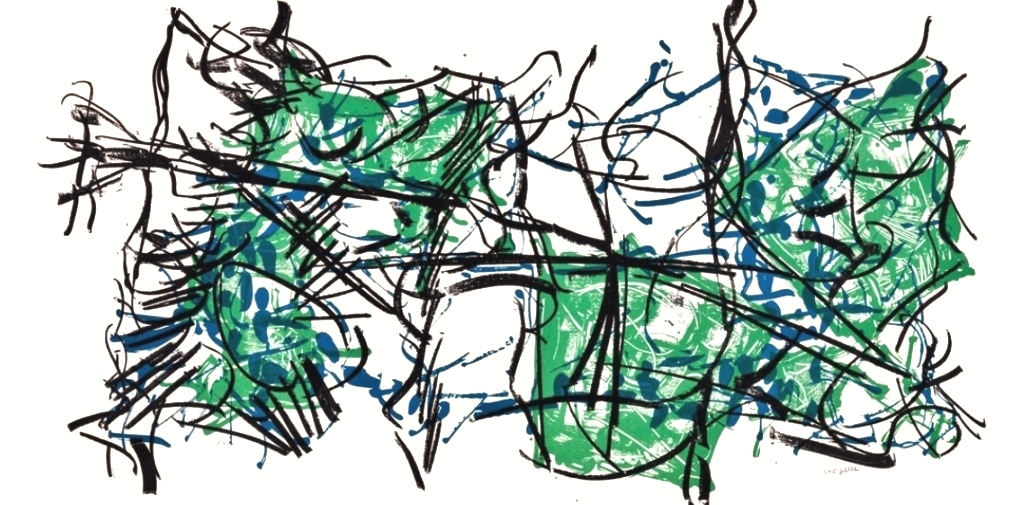 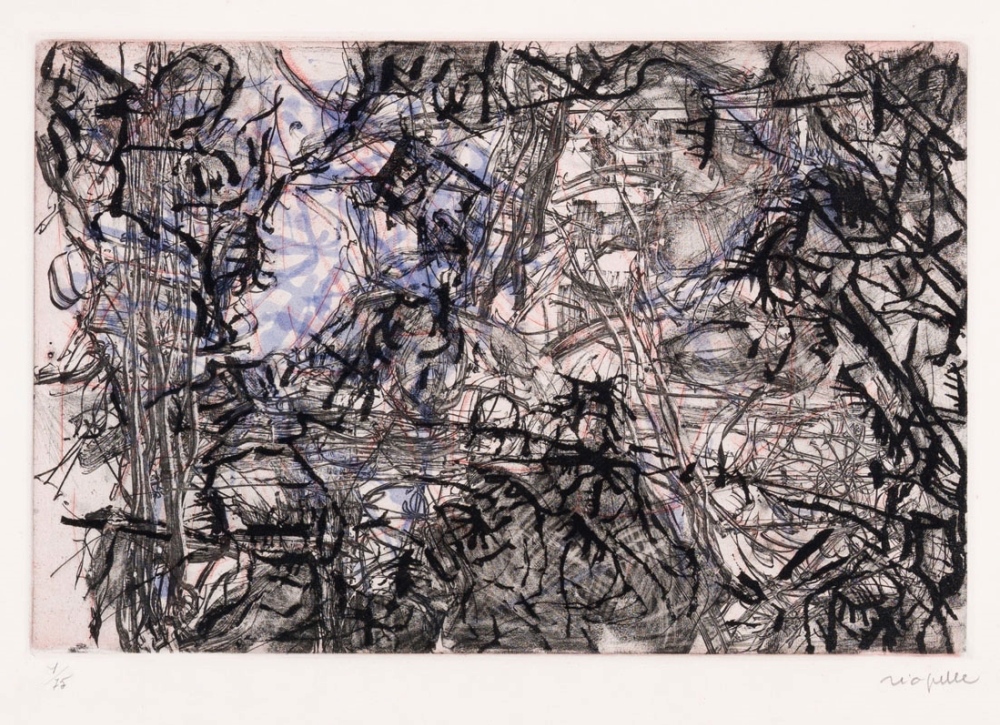 Etching on Japon nacre paper by Jean-Paul Riopelle Titled: By my lake, 1985 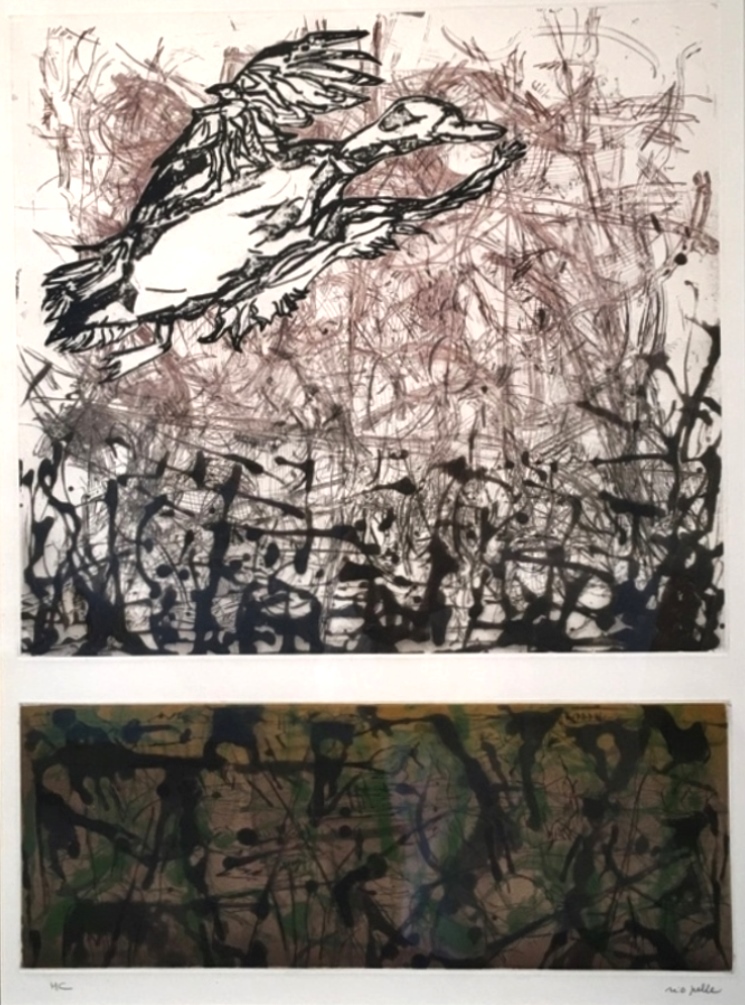 Jean-Paul Riopelle born on 7 October 1923 and died on 12 March 2002; He was a painter and sculptor from Quebec, Canada. He became the first Canadian painter (since James Wilson Morrice) to attain widespread international recognition.

Born in Montreal, Riopelle began drawing lessons in 1933 and continued through 1938. He studied engineering, architecture and photography at the école polytechnique in 1941. In 1942 he enrolled at the École des beaux-arts de Montréal but shifted his studies to the less academic école du Meuble, graduating in 1945. He studied under Paul-Émile Borduas in the 1940s and was a member of Les Automatistes movement.

Breaking with traditional conventions in 1945 after reading André Breton’s Le Surréalisme et la Peinture, he began experimenting with non-objective (or non-representational) painting. He was one of the signers of the Refus global manifesto.

In 1947 Riopelle moved to Paris and continued his career as an artist, where, after a brief association with the surrealists (he was the only Canadian to exhibit with them) he capitalized on his image as a “wild Canadian”.

His first solo exhibition took place in 1949 at the Surrealist meeting place, Galerie La Dragonne in Paris.
In 1959 he began a relationship with the American painter Joan Mitchell. Living together throughout the 1960s, they kept separate homes and studios near Giverny, where Monet had lived. They influenced one another greatly, as much intellectually as artistically, but their relationship was a stormy one, fueled by alcohol. The relationship ended in 1979.

His 1992 painting Hommage à Rosa Luxemburg is Riopelle’s tribute to Mitchell, who died that year, and is regarded as a high point of his later work.

Riopelle’s style in the 1940s changed quickly from Surrealism to Lyrical Abstraction (related to abstract expressionism), in which he used myriad tumultuous cubes and triangles of multicolored elements, facetted with a palette knife, spatula, or trowel, on often large canvases to create powerful atmospheres.

The presence of long filaments of paint in his painting from 1948 through the early 1950s has often been seen as resulting from a dripping technique like that of Jackson Pollock. Rather, the creation of such effects came from the act of throwing, with a palette knife or brush, large quantities of paint onto the stretched canvas (positioned vertically).

Riopelle’s voluminous impasto became just as important as color. His oil painting technique allowed him to paint thick layers, producing peaks and troughs as copious amounts of paint were applied to the surface of the canvas. Riopelle, though, claimed that the heavy impasto was unintentional:

“When I begin a painting,” he said, “I always hope to complete it in a few strokes, starting with the first colours I daub down anywhere and anyhow. But it never works, so I add more, without realizing it. I have never wanted to paint thickly, paint tubes are much too expensive. But one way or another, the painting has to be done. When I learn how to paint better, I will paint less thickly…

Riopelle received an Honorable Mention at the 1952 São Paulo Art Biennial. In 1953 he showed at the Younger European Painters exhibition at the Solomon R. Guggenheim Museum in New York City. The following year Riopelle began exhibiting at the Pierre Matisse Gallery in New York. In 1954, works by Riopelle, along with those of B. C. Binning and Paul-Émile Borduas represented Canada at the Venice Biennale.

He was the sole artist representing Canada at the 1962 Venice Biennale in an exhibit curated by Charles Comfort.

Riopelle received an Honorable Mention at the Guggenheim Museum’s Guggenheim International Award exhibition in 1958 and a major retrospective of his work was held at the Kölnischer Kunstverein, Cologne. Subsequent retrospectives of Riopelle’s work were held at the National Gallery of Canada in 1963, a smaller exhibition at the Musée du Québec in 1967, at the Fondation Maeght (Saint Paul-de-Vence, France) in 1971, and at the Musée d’Art Moderne de la Ville de Paris in 1972. He was made a member of the Royal Canadian Academy of Arts.