Etching on paper by Lucebert Titled: De elementen (The elements), 1981 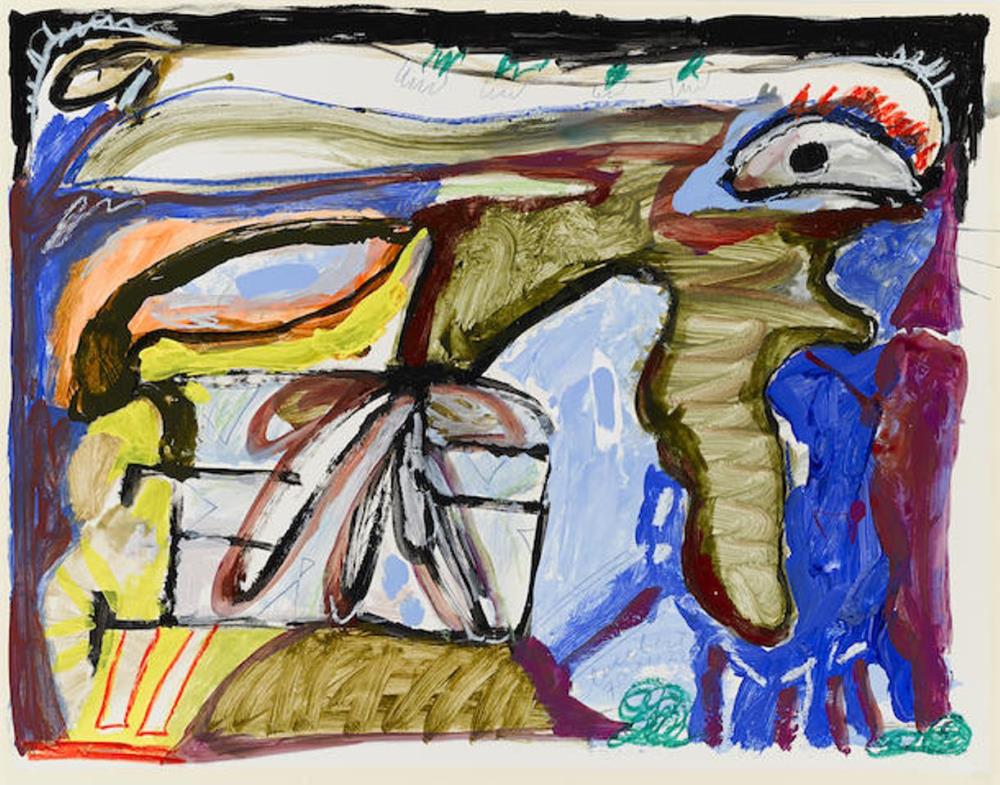 Lucebert born Lubertus Jacobus Swaanswijk on 15 September 1924 and died on 10 May 1994. He was a Dutch artist who first became known as the poet of the CoBrA movement.

He was born in Amsterdam in 1924. He entered the Institute for Arts and Crafts in 1938 and took part in the first exhibition of the CoBrA group at the Stedelijk Museum, Amsterdam in 1949.

Lucebert’s talent was discovered when he started working for his father after school. After half a year of art school, he chose to be homeless between 1938 and 1947. In 1947, a Franciscan convent offered him a roof over his head, in exchange for a huge mural painting. Because the nuns could not appreciate his work, they had it entirely painted over with white paint.

He belonged to the Dutch literary movement of De Vijftigers, which was greatly influenced by the European avant-garde movement COBRA. Lucebert’s early work especially shows this influence, and his art in general reflects a rather pessimistic outlook on life.

His strong personality appealed towards many. As a poet he laid foundation for revolutionary innovation in Dutch poetry.
Most of his poems were bundled in Gedichten 1948-1965. After this period of composing poetry, he worked primarily in the visual arts known as figurative-expressionist from the 1960s.

Lucebert’s sentence “Alles van waarde is weerloos” (“All things of value are helpless”) on a building in Rotterdam.
Well known is his line “Alles van waarde is weerloos” from the poem De zeer oude zingt (“The very old one sings”). The adjective “weerloos” can mean “defenseless”, “helpless”, or “naked”, so the meaning is “All things of value are defenseless/helpless/naked”. This line was put on top of the office building of an insurance company in Rotterdam (near the Blaak station) in neon letters, including his name, sometime in the 1980s or earlier.

It wasn’t the first but is certainly the most prominent commercial use of the line; today three more buildings in the area display it on their walls. Similarly, written on the city’s central library just across the street is “Heel de wereld is mijn vaderland – Erasmus”, “All the world is my fatherland – Erasmus”. Lucebert was also a noted anti-apartheid activist.

Lucerbert died on 10 May 1994 in Alkmaar, Netherlands.