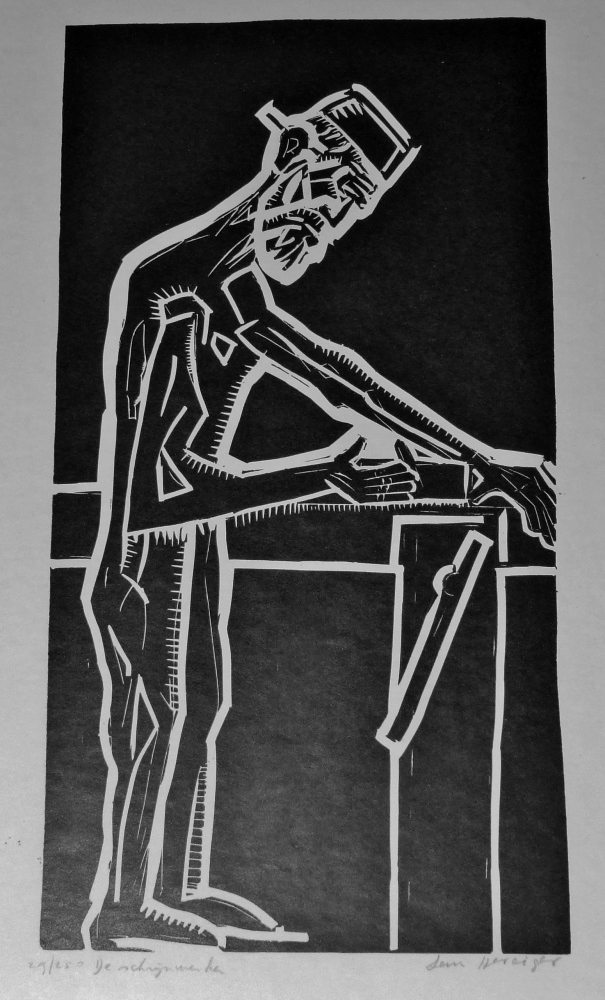 Linocut on paper by Sam Herciger – Titled: The carpenter circa 1965 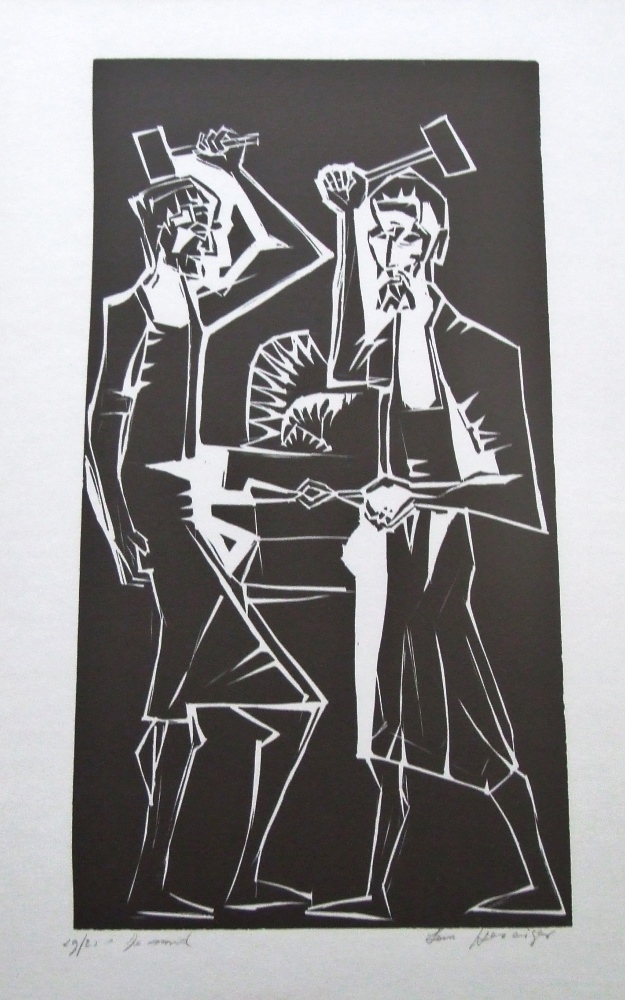 Linocut on paper by Sam Herciger – Titled: The blacksmith circa 1965 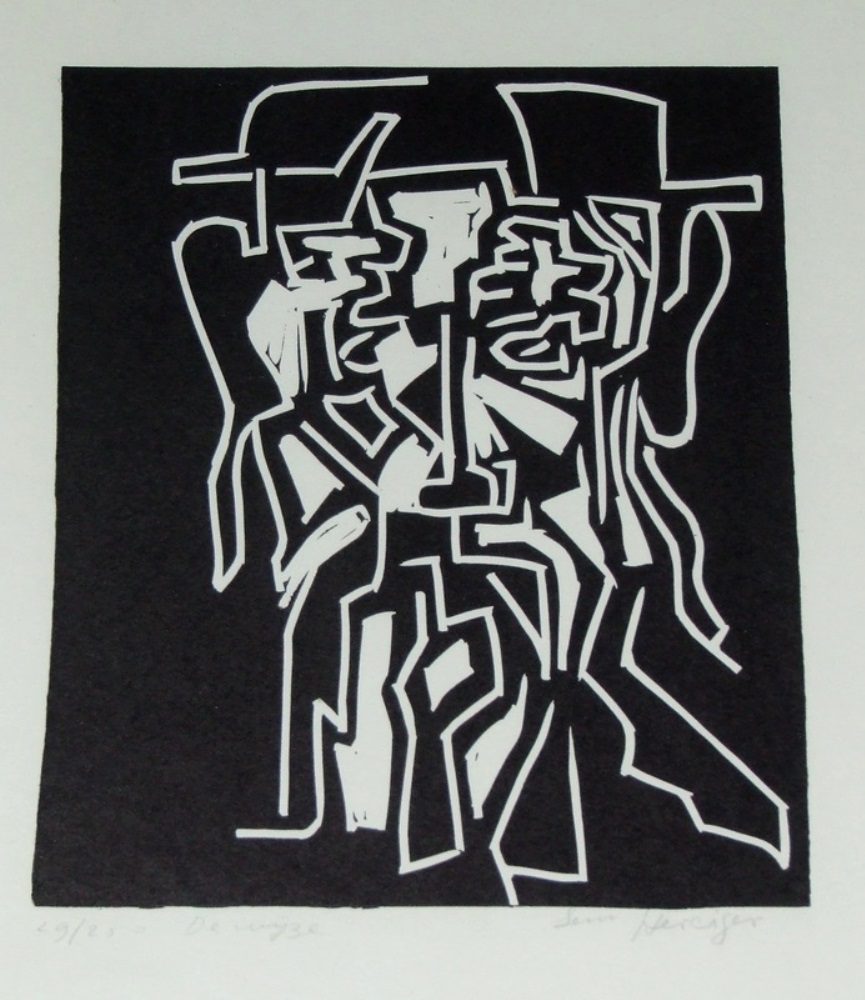 Linocut on paper by Sam Herciger – Titled: The wise, 1965

Sam Herciger was born in Poland in 1917 in Zawiercie and died in Arad in 1981 in Israel. He was a sculptor and engraver of Jewish origin. He had four siblings and was raised in an Orthodox house; he studied in a “cheder”, but practiced painting. At the age of 16, he left Orthodox life and the family home. He started working in fur processing.

He crossed the border into the Soviet Union, hoping to study art and music, but was arrested there accused for spying and sent to prison where he learned Russian. After his release, he returned to Poland, where he was arrested once again on suspicion of now being a Soviet spy.

Released again, he decides to travel to Belgium, where he finally settles in Antwerp. He rediscovered his love for art and began studying at the Antwerp academy. He was a pupil from 1937 on in the class led by the sculpture Willy Kreitz.

After the outbreak of World War II, Herciger attempted to flee to Spain but was arrested in France and interned in the Gurs camp. He was returned to Belgium by the French and despite the precarious situation in Antwerp he married a Jewish woman named Henni. A year later they both fled to France an attempt was made to live hidden but they were captured and deported to Auschwitz, where Henni perished in the women’s camp, while Sam was working in the camp laundry.

In January 1945, the Soviet troops approach and the Nazis abandon the camp of Auschwitz, Sam Herciger among 57,000 other detainees were forced to march towards Germany. Weakened and sick they were sent in to this death march which he barely survived; 37,000 others were less fortunate.

After the liberation, returning alive from hell, he moved to Brussels and continued his training at the Academy of Brussels with master sculptors like Marnix d’Haveloose and Fernand Debonnaire.

He married a Holocaust survivor, who fell ill shortly after the marriage and she committed suicide. The first individual exhibition he had at the Museum of Fine Arts in Rio de Janeiro in 1953 and he returned to settle again in Antwerp in 1956. It was then during an exhibition in Antwerp that he met Edith Beck, a painter 13 years older. They married and had two children.

Sam and Edith had their workshop at Lange Leemstraat, 184 (long Clay Street) in Antwerp. Sam and his wife Edith Beck took courses at the Antwerp Academy and privately; Edith took courses with Jacques Gorus, among others. Sam studied engraving, drawing and watercolor and his wife painting and charcoal.

As a sculptor Sam is attracted to wood engraving, (woodcut) and linography. Having lost an eye, he will return to engraving later in his life, leaving sculpture aside.

Sam Herciger practices modeling as a sculptor, but goes especially for direct carving on wood. In his sculptures, matter plays a decisive role: it gives, so to speak, the line.

His artworks are the result of a reflection and a process of maturation of the struggle with the material. He worked in stone, marble, plaster, bronze and wood. He designed and created, portraits, large prickly heads with a character and of cause Jewish religious subjects.

Sam, for his part, approaches religious subjects with an art very close to prayer. The head of a prophet, head of rabbi, Menorah … and also wooden high reliefs where the memory of living through terrible years are revealed.

Throughout Sam Herciger’s work, you can feel the wind of exodus, war and immense hope.

Far from “art to make people speak”, it expresses its own feelings without fashion or the desire to advertise it.

As taken from the press: “Simple seminal expressionism, but at the same time sacred verticalism.”

Among others he worked in the synagogue of Antwerp. Herciger has exhibited his art in museums and galleries. He is mentioned in “Two centuries of signatures of Belgian artists”.

Sam and Edith emigrated to Israel in 1979 where he and Edith lived and worked until Sam’s death in 1981.

He has works at the Museum of Eilath, Israel and Jewish Museum of Belgium, Hatima Tova.