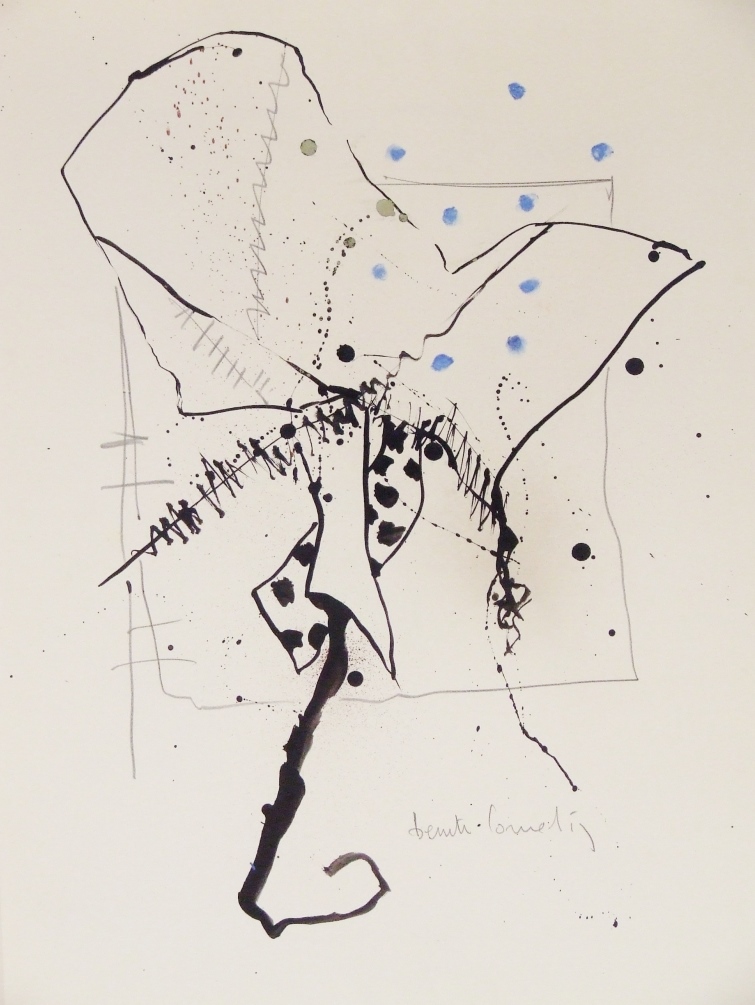 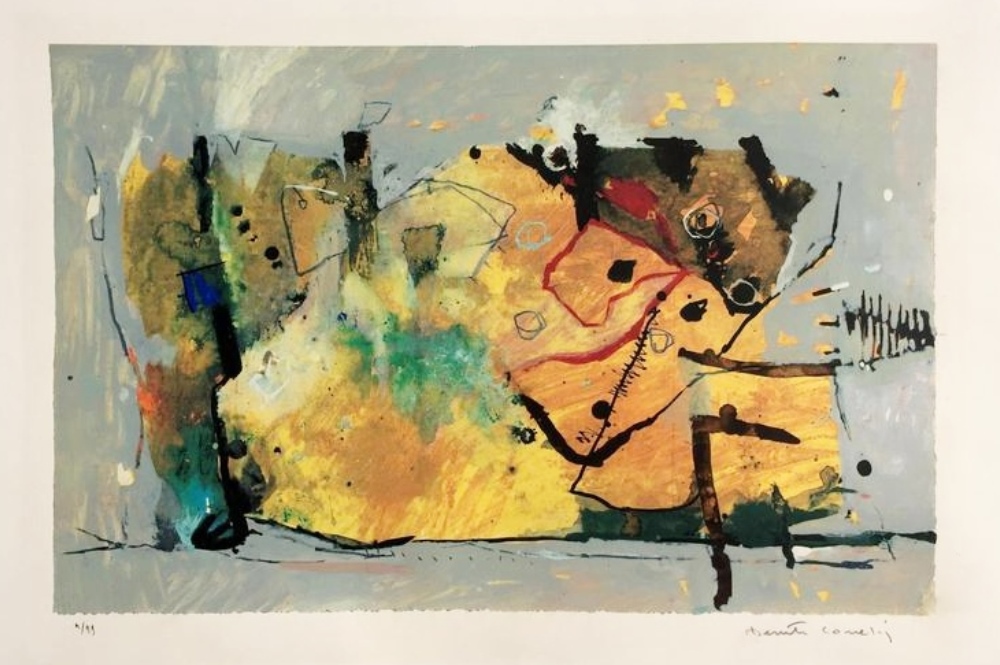 Lithography in color on paper by Beniti Cornelis. Abstract composition

Beniti Cornelis was born in Mechelen, Belgium, in 1946 and died in that same city in 2017.

Beniti Cornelis considers painting as a search for equilibrium between the graphic and the painterly. Cornelis is not a conceptual artist, but he is also no ‘real’ expressionist. His method is too subtle and too complicated to speak of pure expression. He calls his style ‘lyrical translation’.

Speech is not part of his artistic language. He rarely gives a title to a painting. A painting by Cornelis is immediately recognizable. The center is dominated by earth-tone graphic elements, surrounded by a quieter area. The lyricism of color is approached, defined, crossed and intensified by an incessantly repeated graphic intervention.

During the 1970s, he painted metaphysical canvases, then hyperrealist paintings. At some point, it becomes clear for him that the perspective is just a lie: he said that it is foolish wanting to represent three dimensions on a flat surface or plane that has only two.

To regain an ingenuous look, Cornelis only made drawings of children for eighteen months. Since 1980 his way of painting has radically changed.

The shooting of a film about his work gives him to think about the sources of his inspiration. He discovers that they go back to his childhood. As a young child, Cornelis is passionate about the arrangement of everyday objects and the structure that results from those objects. At school, the didactic boards representing the growth of beetles and insects caught his imagination. These beetles started to appear in his paintings.

The graphic work of Cornelis nourishes his painting and vice versa. He does not use graphic technique to reproduce his paintings. Most often it ends an artistic period with a series of graphic works, which form a synthesis. These images are standalone works. Cornelis prints them himself – all passages sometimes sixteen steps or more.

In 1982, the children of Cornelis dig up from the garden an old and rusty toy: a revolver. The object becomes a source of inspiration and is found on several canvases. Cornelis auscultates also reminiscences of cave paintings.

In 1995, Cornelis executed works of the installation type. He places paintings on pedestals which are an integral part of the work. The irony is never far away.

One day Cornelis sees someone take out a wallet decorated with a sticker. The sticker having moved a little leaves in its original location parts of its circumference and an echo is made of traces of glue. In the work of Cornelis, start to appear twin forms.

Since 1996 Cornelis has worked with photos that he cuts and uses and as graphic elements in his paintings. The gray values ​​of the baryte photos produce surprising new elements.

This also applies to the forms he introduces into it. All of this goes hand in hand with greater sobriety and greater prescription. In terms of artistic expression, Cornelis is embarking on new paths.

In 1997, he introduced the burgundy color into his work. This symbolizes for him the sacred. It gives it a certain autonomy by applying it on small surfaces that he hangs near a larger canvas. This approach widens the picture and brings out a very personal rhetoric.

Works in which the artist uses photos tend to become larger, and even serial. They are affiliated with polyptychs, but also with his installations and their environment.

Sources in part of the Text: A shaman in Mechelen by Jan Lampo, 1999 and Ysebaert Louisseize Arts archives as well as translations.