Mixed media etching on paper by Constant – Titled: The chair, 1971 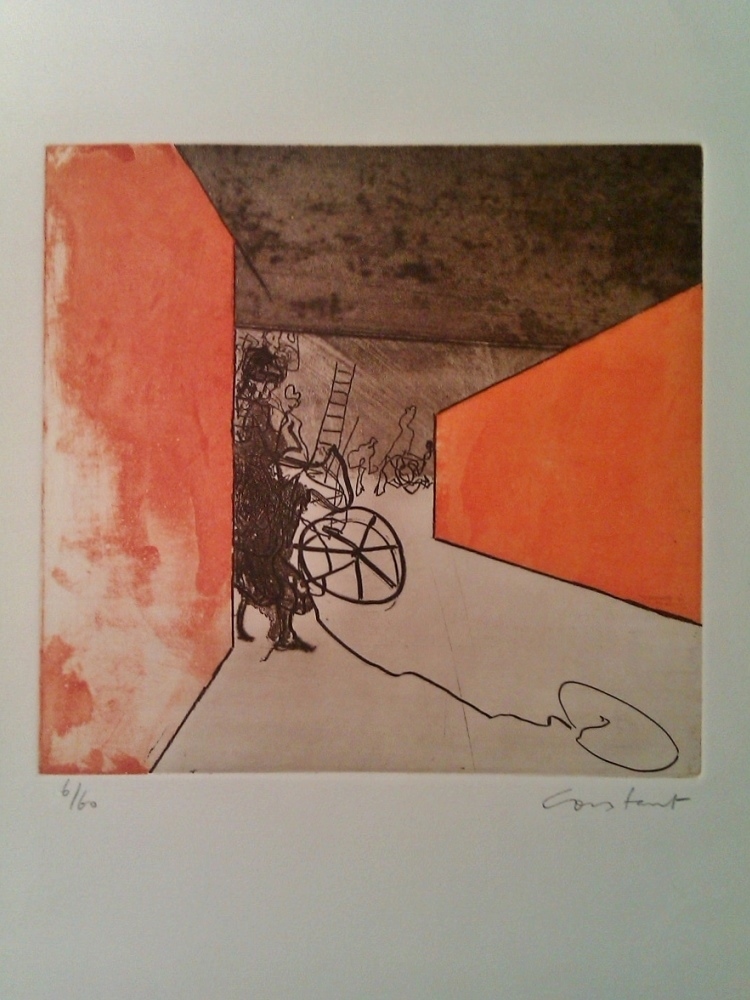 Etching in color on paper by Constant – Titled: Orange labyrinth, 1972 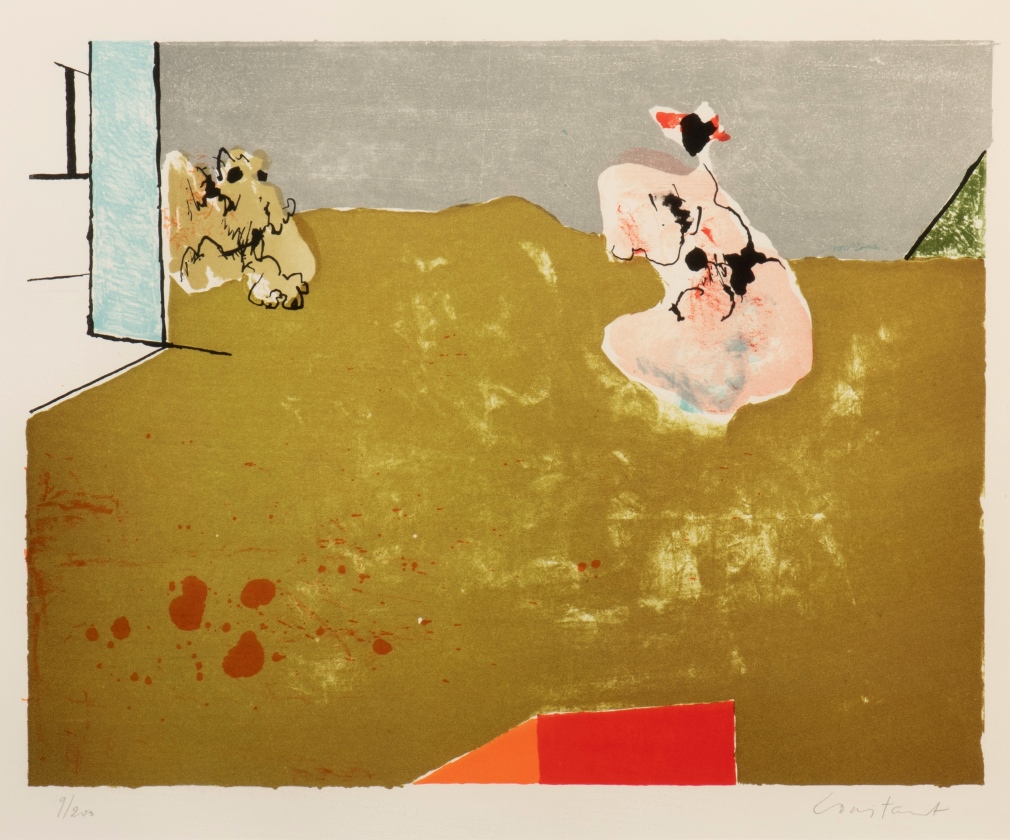 Lithograph in color on Velin Arches paper by Constant – Titled: Woman and dog, 1965 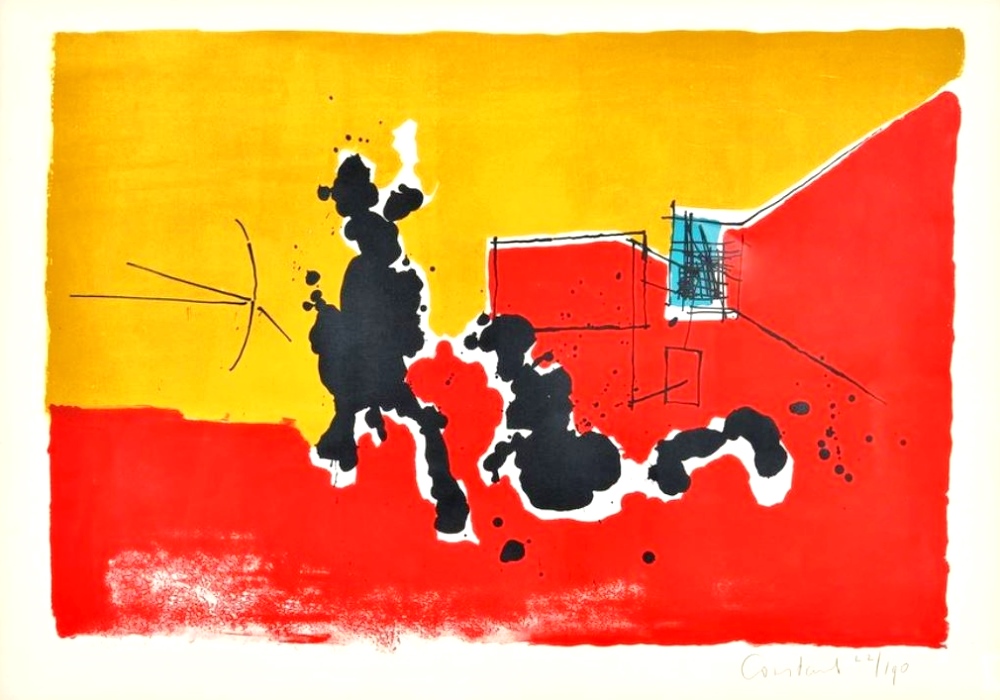 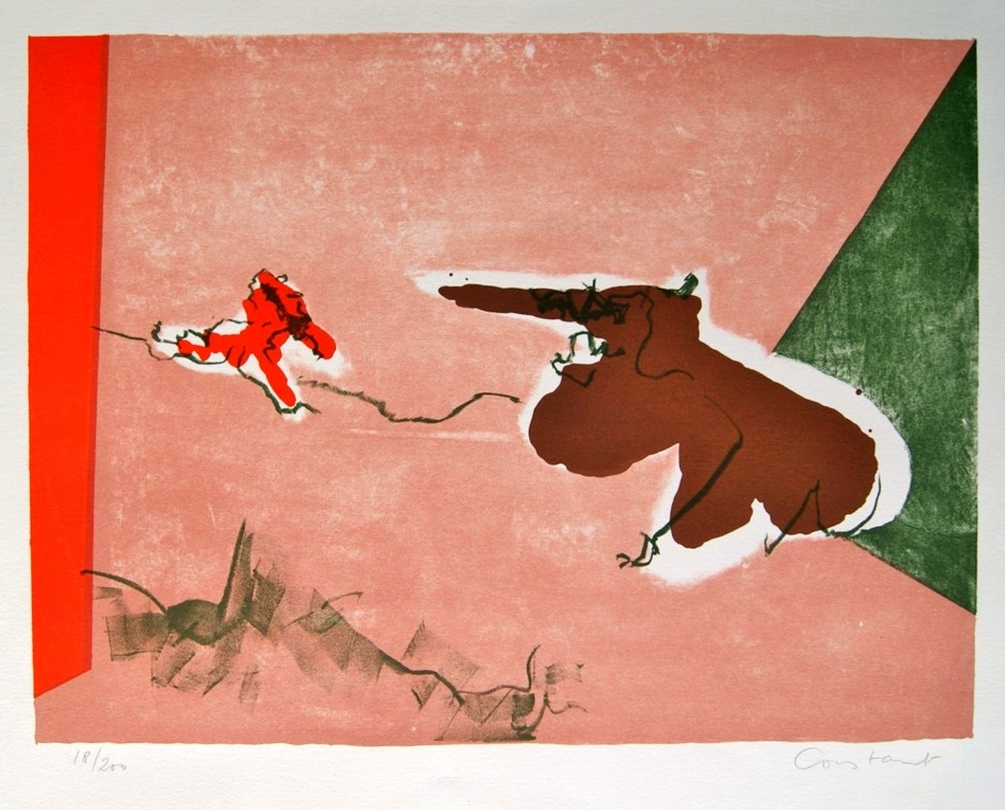 Constant Anton Nieuwenhuys born on July, 21 in 1920 and died on August, 1 in 2005, better known as Constant, he was a Dutch painter, sculptor, graphic artist, author and musician.

Constant was born in Amsterdam on 21 July 1920 as the first son of Pieter Nieuwenhuijs and Maria Cornelissen. Their second son Jan Nieuwenhuys was born a year later. Both sons became artists although their parents had no apparent interest in art.

As a young child Constant drew passionately and showed great talent. He read literature with a special preference for poetry and played musical instruments. During his teenage years he learned to sing and to read music while in the church choir at a Jesuit school. In his later years, greatly inspired by gypsy music, he only played improvised music. He played guitar, violin and at 45 years of age also mastered playing the cimbalon.

Constant painted his first oil painting, De Emmaüsgangers, at age sixteen. It depicted the revelation of Jesus to two of his followers in Emmaus. With no money to buy materials he painted this painting on a jute sugar bag with pigments he had bought from a house painter. Many of Constant’s early drawings and paintings are religiously inspired, due to his Jesuit schooling, yet at the age of twenty Constant turned his back on Catholicism.

After one year studying at the Kunstnijverheid school (Arts and Crafts School), Constant attended the Rijksakademie voor Beeldende Kunst (State Academy of Fine Arts) from 1939 to 1941. This education in craftsmanship was put to use especially during his “New Babylon” period, when Constant built many constructions and models.

Constant lived and worked in Bergen from 1941 to 1943. Through the Bergense School he was introduced to the work of Cézanne, which impacted him deeply, as evident in Zelfportret (Self Portrait), 1942.

The city of Bergen was evacuated by the Germans in 1943 and so Constant and his wife Matie van Domselaer, whom he married in July 1942, moved back to Amsterdam. During this period Constant went into hiding and refrained from registering at the ‘Kulturkammer’ (Nazi Chamber of Culture) to avoid the ‘Arbeitseinsatz’ (labour supply for the Germans). Because of this he was unable to conventionally exercise his craft or to buy art supplies. To paint Constant used tablecloths and bed linen and had to rinse them out to start again.

During the war Constant’s brother in law, Jaap van Domselaer, moved into the apartment to hide from the ‘Arbeitseinsatz’ and he introduced Constant to Plato, Spinoza, Descartes, Kant, Hegel and Marx. Especially the latter provided great inspiration to Constant regarding his later ideas on art and society.

During the winter famine of 1944 Constant’s first son, Victor Nieuwenhuys, was born. After the war, Constant, his wife and son moved back to Bergen only to return to Amsterdam in 1946 where they lived in an apartment across from Artis (a zoo).

After the war; Constant was able to grow as an artist again after years of isolation and limitations. He liberated himself artistically and experimented with multiple techniques of art-making. He was inspired by Cubism especially by Braque. In 1946 his daughter Martha was born, followed by his daughter Olga in 1948.

In 1946 Constant traveled to Paris for the first time where he met the young Danish painter Asger Jorn. The friendship between Jorn and Constant later formed the basis for CoBrA.

In July 1948 Constant founded Reflex Experimentele Groep in Holland with Corneille, Karel Appel and his brother Jan Nieuwenhuys. The first edition of the magazine Reflex was published with a manifesto written by Constant. For Constant art had to be experimental. He had deducted this from the French word ‘expérience’ and believes that art springs from experiences of the artist and is continuously changing.

This manifesto would become one of the most important texts on art in the Netherlands after WWII. In this manifesto he states that firstly the process of creation is more important to the experimental artist than the work itself. It is a means to reach spiritual and mental enrichment. Secondly the work of experimental artists is a mirror image of changes in the general perception of beauty.

Constant, Corneille and Appel, three totally different characters and artists, were united in their quest for innovation. They exhibited their work together and were often seen together in the European art scene. This was somewhat to the annoyance of other experimental artists in the Netherlands. The wanderlust of the three is especially notorious.

Later in the year 1948 on the terrace of café Notre Dame in Paris the Experimentele Groep in Holland linked up with Christian Dotremont and Joseph Noiret from Belgium and Asger Jorn from Denmark to form CoBrA, a name which was made by Dotremont, formed by the first letters of their hometowns: Copenhagen, Brussels and Amsterdam. The members opposed aesthetics in painting and bourgeois art in general.

Constant had already outlined their ideas in his manifesto in Reflex magazine. This manifesto holds another of his famous quotes: “A painting is not a structure of colours and lines, but an animal, a night, a cry, a man, or all of these together”

Constant was productive during the CoBrA period. White Bird (1948), Ladder (1949) and Scorched Earth I (1951) are some of his noted works from this period. At this time CoBrA published bulletin additional artists from several different disciplines joined their ranks. In 1948 Constant, together with poet Gerrit Kouwenaar, published a poetry album Goede Morgen Haan. Additionally there were two large CoBrA exhibitions, one in Amsterdam in 1949 and one in Liège in 1951.

The director of the Stedelijk Museum Amsterdam (Municipal Museum of Amsterdam), Willem Sandberg, was very supportive of young artists and fully supported the CoBrA group by giving them seven large rooms to exhibit their work in. Most of the CoBrA works had been fairly small due to their lack of money and so Sandberg gave the artists an advance to create some larger works in the week before the exhibition. Constant, Corneille, Appel and Eugène Brands created several large pieces of art that have become iconic for the movement. The architect Aldo van Eyck was commissioned to shape the exhibition. The exhibition was unconventional to say the least. The works of art as well as the way they were presented give rise to harsh critique from press and public. A critic from Het Vrije Volk (Free People) wrote, ‘Geklad, geklets en geklodder in het Stedelijk Museum’ (Smirch, twaddle and mess in the Urban Museum of Amsterdam). An often heard remark from the public was that their children could probably do the same, only better. The CoBrA artists were considered scribblers and con artists.

In the Liège exhibition in 1951, even larger than the Stedelijk exhibition, the CoBrA group dissolved itself and with its tenth edition bulletin publication. As Christian Dotremont, the international secretary, stated in Museum News in 1962 the group would rather ‘mourir en beauté’ (die in beauty) than become a regular artist interest group. However short the existence of the group was, it forever changed the landscape of postwar European art.

After the CoBrA dissolved Constant’s work became more abstract. Back in Amsterdam in the summer of 1952 he developed an interest in spatial architecture and three-dimensional works. With Aldo van Eyck, whom he met during his CoBrA time, he created a space for the exhibition ‘Man and House’ at the Urban Museum Amsterdam from 1952-1953. In 1954 he worked on a project with Gerrit Rietveld. Together they created a model house for warehouses de Bijenkorf.

In 1952 Constant received a scholarship from the Arts Council of Great Britain to study in London for three months. There he met, amongst others, Henry Moore, Anthony Hill, Kenneth Martin, Ben Nicholson, Barbara Hepworth, Roger Hilton and Victor Pasmore. He found the art climate in London very welcoming. As opposed to Paris, Constant felt that art was judged more objectively.

In that time Constant lived near Kensington Gardens and as he walked through the bombed city every day he started to wonder how people live and how cities should be built. His stay in London raised his awareness of how the constructions that surround us influence us. He felt that the constructions of his time were mostly practical, immensely dull and provided no room to develop playful and creative lifestyles.

In the summer of 1956 Asger Jorn invited Constant to Alba, Piedmont, Italy, for a congress dedicated to ‘Industry and the Fine Arts’ initiated by ‘Mouvement pour un Bauhaus Imaginiste’ (International Movement for an Imaginist Bauhaus. At this congress Constant presented his lecture Demain la poésie logera la vie in which he pleaded for a free architecture which could stimulate a creative lifestyle rather than impede it. The Lettrist International were also at the congress and they pleaded for a unitary urbanism (the synthesis of art and technology). Later that year Constant visited Debord in Alba, which proved to be an inspiration for both. In 1952 Debord had founded the ‘Lettrist International’, for which he was a writer, filmmaker and strategic activist.

Debord wanted to establish an even more radical movement which would totally abandon the arena of fine art while solely focusing on questions of psychography, a total dissolution of boundaries between art and life. In 1957 he and Asger Jorn brought together the International Movement for an Imaginist Bauhaus and the Lettrist International by establishing Situationist International. They specifically denied their status as an art movement.

Constant did not join SI at that time. He objected to the SI on the ground that the movement seemed to be established mainly by artists who have their own interest at heart more than a common goal. When SI openly pleaded for ‘unitary urbanism’, as defined by Constant and Debord, Constant joined. An intensive correspondence between him and Debord followed. Constant wrote several theoretical articles for the French SI journal and staged events at several museums in Paris as well as the Stedelijk Museum in Amsterdam, where he showed his New Babylon series in 1959.

The success of the New Babylon show in 1959 prompted SI to plan a group exhibition there in April–May 1960. This exhibition would never take place. Disagreements in the group resulted in a split and several expulsions. In 1960 Constant left the group for the same reason he initially objected to joining. By 1961 no one remained of the original artistic core except Debord himself.

According to the Dutch architect Rem Koolhaas, Constant has made a lot of architects think with his New Babylon: “He was an example of courage”.

Constant died on 1 August 2005 in Utrecht and was survived by his fourth wife, son, three daughters and stepdaughter.