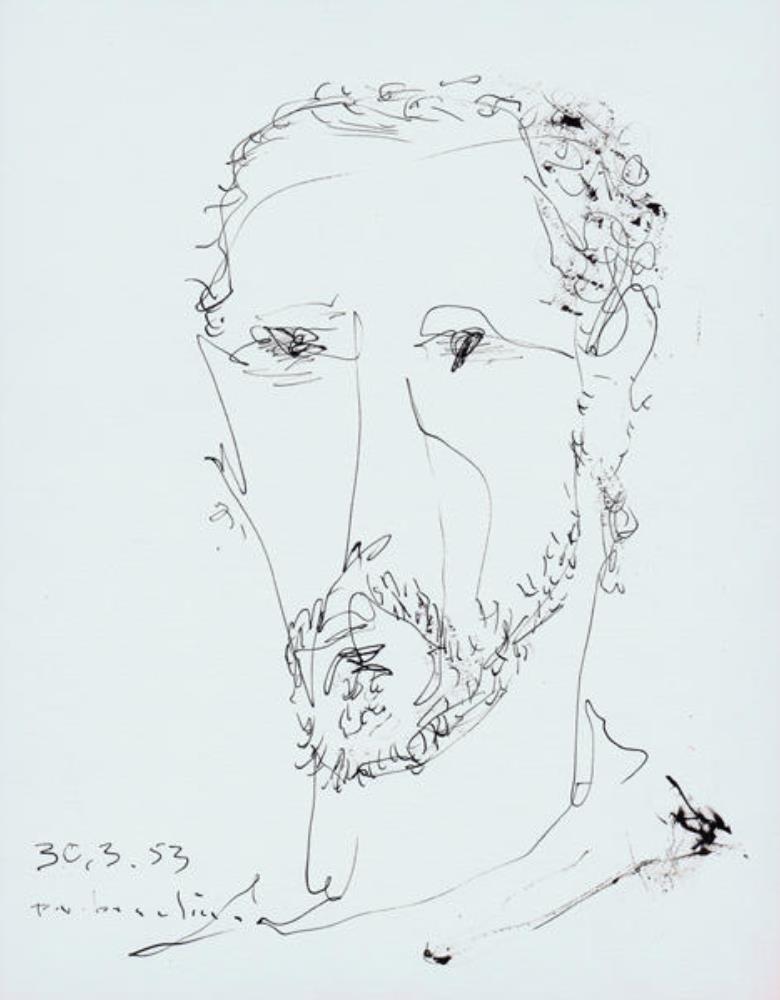 Chinese ink on paper by Paul-Vanier Beaulieu – Face of a man, 1953 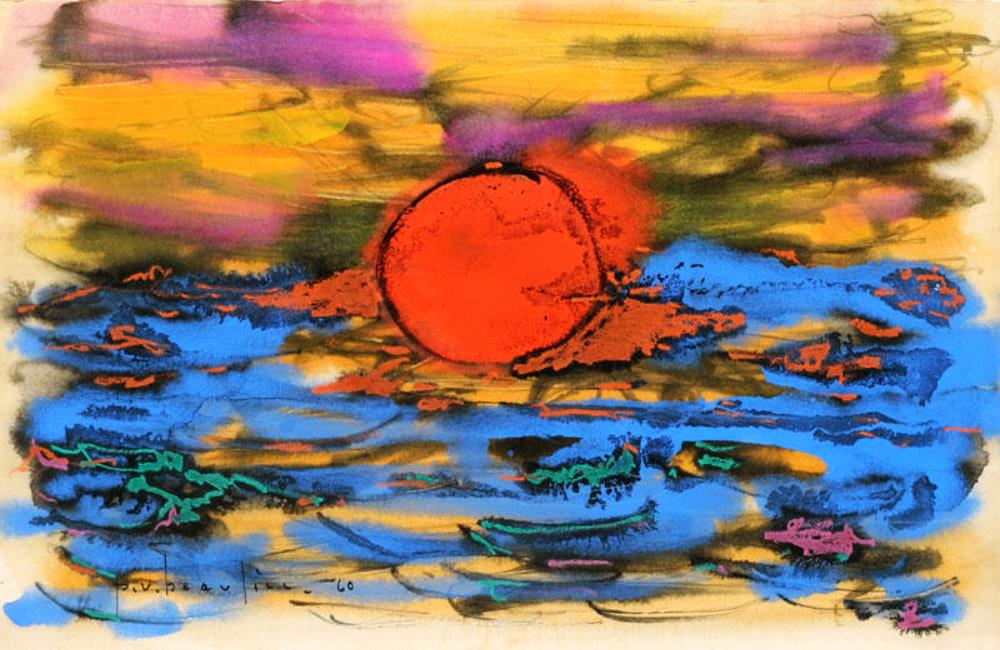 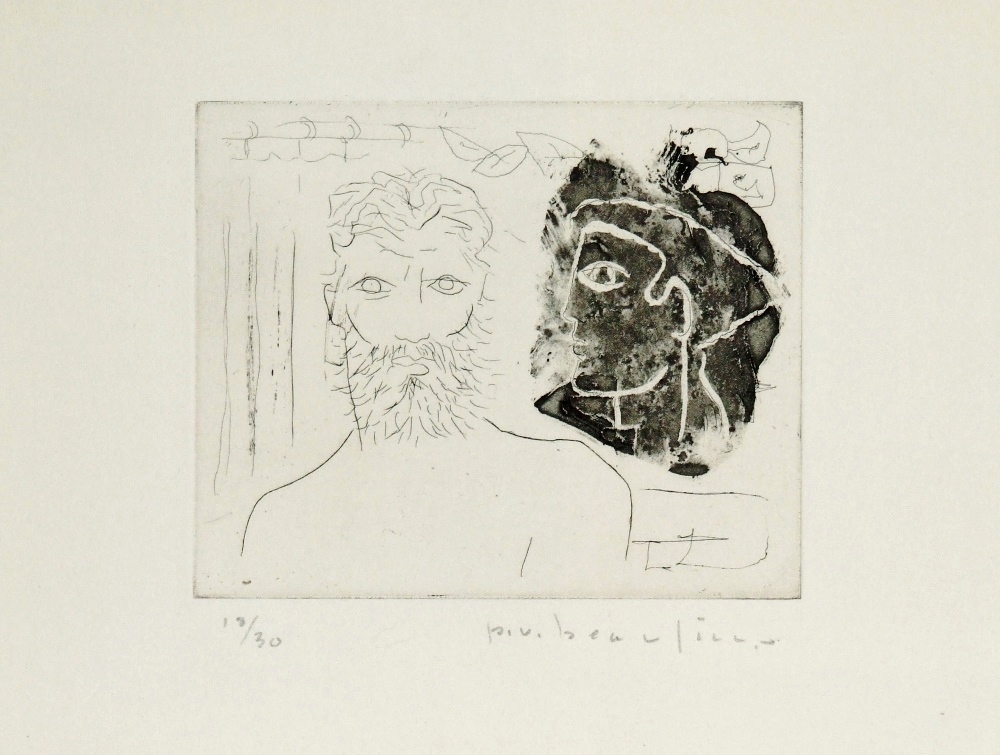 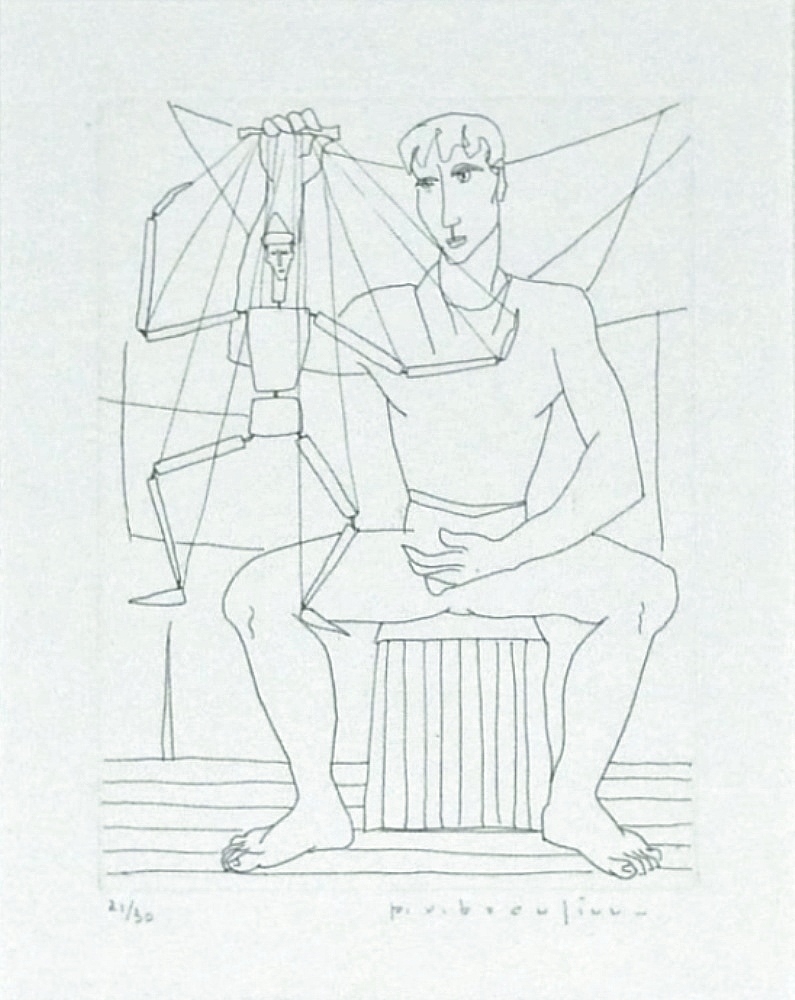 Born in Montreal, Quebec, he is the eldest of seven children. His father who enjoyed painting as a hobby is a barrister.

Paul spends four years at the École des Beaux Arts de Montréal, spread over two periods from 1927 till 1930 and from 1936 till 1937, where Robert Pilot teaches him etching.

At the Beaux Arts, his friends are Jean Paul Lemieux and Stanley Cosgrove.

Disappointed by the academic teachings of the École des Beaux Arts, he opens in 1930 a commercial art studio with Gonsalve Desaulniers, who leaves after one year. Although the difficult context of the 30’s Beaulieu manages to make a living for six years. A meeting with a café owner brings him to be hired as a waiter at the café, where he luckily is allowed to exhibit his paintings.

In 1938, he’s saved enough money to travel, and makes his way to Paris, where he joins his brother Claude who’s been there since 1935, it exposed him to the political, intellectual and artistic stimuli of pre-war Paris. Paul Beaulieu met several leading artists there, including Pablo Picasso, whom he regularly visited in his atelier. Influences of Picasso’s cubist style and many of his known figures and symbols can be noticed in Beaulieu’s works.

Beaulieu then buys a studio in Montparnasse. He studies at the École des Beaux-Arts de Paris in 1938 and continues to work in his Paris studio until the Nazi invasion in 1940. As a citizen of a country at war with Germany, he is interned at St-Denis from 1940 to 1944, along with his brother Claude, and Canadian artist Jean Dallaire. Beaulieu continues to paint throughout his internment.

After the war he came back to Montreal where he had two solo shows. He then went back to France to his old Paris studio in 1947 and continued to work and travel around France and Europe during the next two decades. During these years he also exhibited in France, as well as in Canada, at salons and galleries.

His favourite theme was still life, which he explored with great originality, juxtaposing the integrated landscape in the background to the ensemble of the piece.

Beaulieu’s oeuvre is not limited to still life and landscape. He explored many other themes, including portraits, whimsical scenes populated by acrobats and puppets, as well as avant-garde non-figurative compositions. Ultimately, it was the deviant modernist rendering of his shapes and forms that gave rise to and influenced more experimental painting in his native Quebec.

In 1951 he received a prize for a painting at the Quebec Provincial Exhibition and in 1960 he received a grant from the Canadian Arts Council for a study trip to Italy. Over the years he has also exhibited his work in New-York City, Mexico City and Rio de Janeiro.

Paul-Vanier Beaulieu has exhibited in Quebec, Toronto, New York, Mexico City, Rio de Janeiro, and other centres. He is represented in major Canadian Museums, the Bezalel Museum in Jerusalem, and the Museum of Modern Art in Paris.

He returned to Canada in 1973 and bought a house in Saint-Sauveur, Quebec, where he died 23 years later at age 86.

*Particularly interested in form and design, he applied his paint liberally with a palette-knife and brush in bright colours.

Dorothy Pfeiffer, a Montreal art critic, once wrote in the Montreal Gazette; “… his work is suffused with a subtle and Romanesque love of colour.”*

Beaulieu’s media include oils, watercolours, lithography and etching. Paul Duval referred to his etchings as “crisp” and used the artist’s aquatint entitled “Illustration” for an example in his book on drawings and prints.