"Paintings are my honey, colors are my flowers, velocity is what’s required of a thief—he must paint as speedily as he draws a gun."

Lithograph in colors on paper by Walasse Ting – Titled: Grasshoppers, 1986 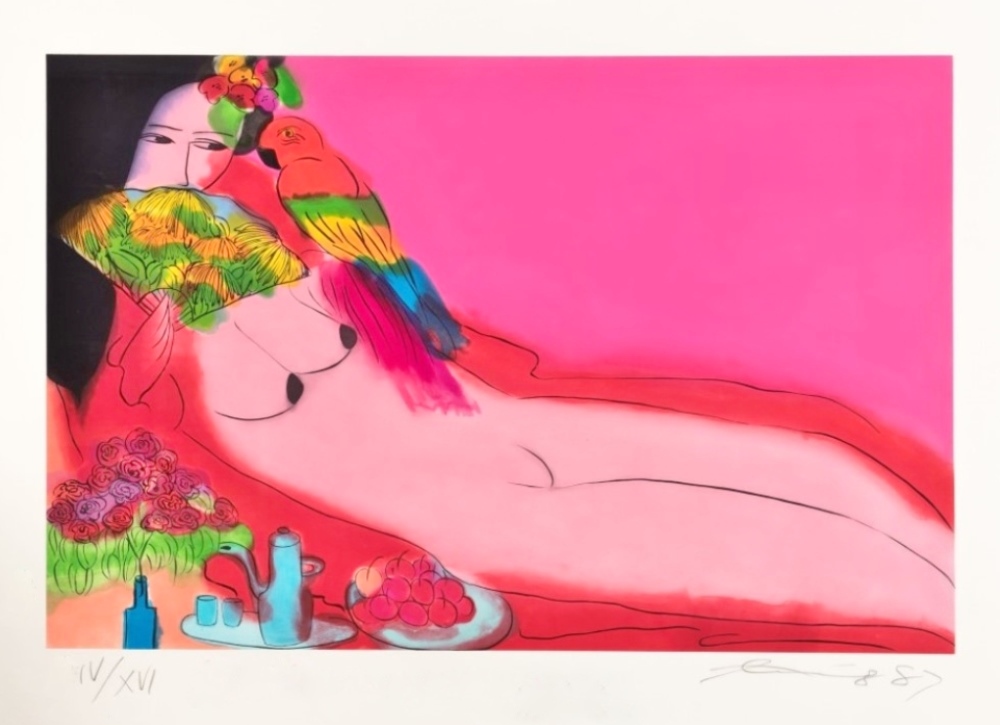 Walasse Ting was born on October 13, 1929 in Shanghai, China. Walasse came to the United States in 1957 and later in 1974, he became an American citizen. He was a sculptor and poet, who represented Abstract Expressionism and Pop Art movements. In his works, he depicted nude women, cats, birds and other animals. Ting is also the author of several books.

In 1940, Ting briefly studied at the Shanghai Art Academy, but always considered himself to be self-taught, learning to draw with chalk on the street at a young age.

In 1952, Walasse left for Paris, where he became associated with the avant-garde group COBRA. Sometime later, in 1957, during the height of the Abstract Expressionist and Pop Art movements, the artist settled down in New York.

There, Ting began his career as an abstract artist, but in the mid-1970’s, he returned to figurative art. In the 1970’s, Ting developed his distinctive style, using Chinese calligraphic brushstrokes to define outlines and filling flat areas of colour with vivid acrylic paint.

Ting held more than sixty solo exhibitions in major art galleries and museums around the world. After more than twenty years in New York, he moved to Amsterdam, where he had a spacious studio. Besides painting, the artist worked on numerous other projects, among them creative direction for theatre, teaching and lecturing.

From 1989 he lived alternately in New York and in Amsterdam, where he had a studio together with Appel. In 2002 he fell into a coma after a cerebral hemorrhage, after which he was cared for in a nursing home in Amstelveen. Ting was no longer able to continue his artistic career. He spent the remainder of his life, looked after in a medical institute in Amstelveen, the Netherlands.

Two weeks before his death, he was taken to New York by his children where he died at the age of 80 in 2010.

He won the Guggenheim Fellowship for drawing in 1970.

Sometimes we use its Chinese name 丁雄泉 or its translations in Mandarin and Cantonese: Ding Xiongquan or Ting Hsiung-ch’uan.