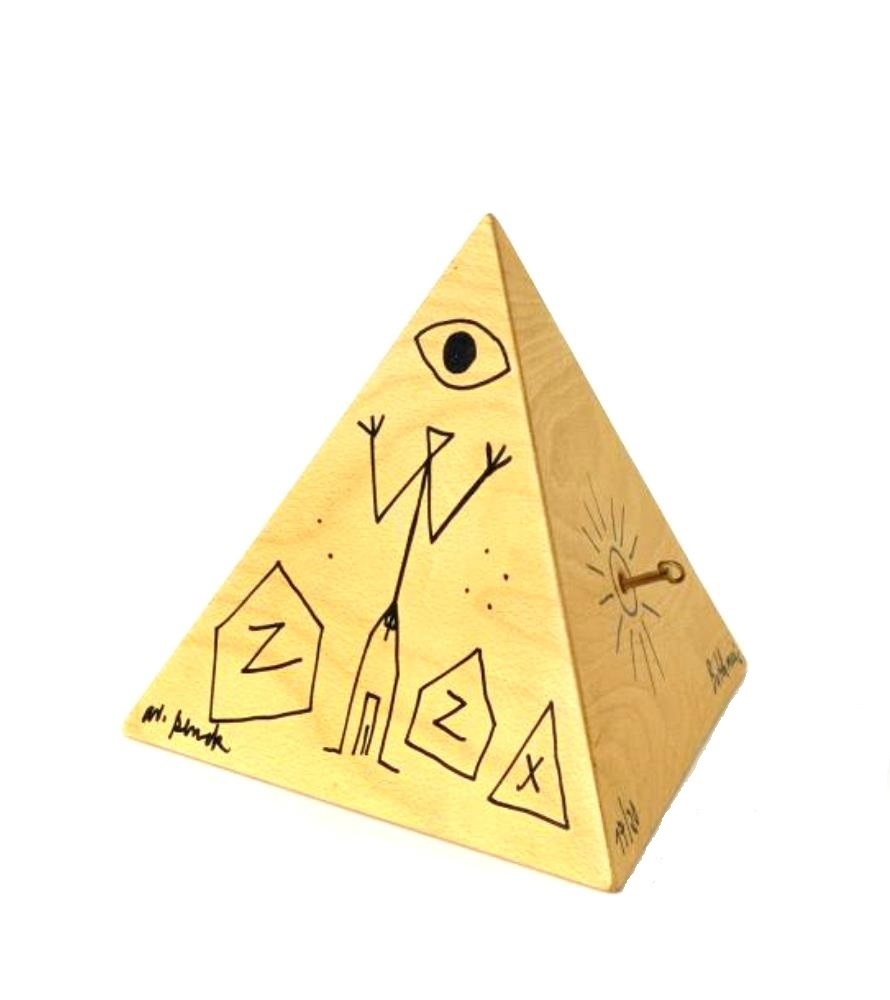 Acrylic on canvas by Penck – Titled: Black and white composition, 1995

Ralf Winkler, alias A.R. Penck is a German painter, printmaker and sculptor. He was born in Dresden, East Germany, and studied together with a group of other neo-expressionist painters in Dresden. He became one of the foremost exponents of the new figuration alongside Jörg Immendorff, Georg Baselitz and Markus Lüpertz.

Under the communist regime, they were watched by the secret police and were considered dissidents. In the late 1970s they were included in shows in West Berlin and were seen as exponents of free speech in the East. Penck was a participant in the Documenta 5 in Kassel in 1972 in the Department of Individual Mythologies and also represented at the Documenta 7 in 1982 and the Documenta IX in 1992 as an artist.

For the Documenta 6 in 1977, pictures were provided by him, the exhibition was prevented by the action of an unofficial employee of the state security of the GDR on a Hessian parliamentarian.

His work was shown by major museums and galleries in the West throughout the 1980s. Penck was counted among the “New Fauvists or Neue Wilde” in the 1980s.

During this time, he also appeared as a drummer or keyboarder in the group Triple Trip Touch (aka TTT or TTT), which he had founded together with Frank Wollny and frequent appearances with Frank Wright, Frank Lowe, Jeanne Lee, Alan Silva, Peter Kowald, Helge Leiberg, Clarence Sharpe or Louis Moholo followed.

He took every opportunity to play with some of the best Jazz musicians of the late 1980s including Butch Morris, Frank Wright, Billy Bang, Louis Moholo and Frank Lowe, organizing events at his country mansion in Heimbach in 1990 involving installations by Lennie Lee, performances by Anna Homler and paintings by Christine Kuhn.

They were included in a number of important shows including the famous Zeitgeist exhibition in the well-known Martin Gropius Bauhaus museum and the important New Art show at the Tate in 1983.

In the 1980s he became known worldwide for paintings with pictographic, neo-primitivist imagery of human figures and other totemic forms. He was included in many important shows both in London and New York. Penck’s sculptures, though less familiar, evoke the same primitive themes as his paintings and drawings and use common everyday materials such as wood, bottles, cardboard boxes, tin cans, masking tape, tinfoil, wire and are crudely painted and assembled. Despite the anti-art aesthetic the rough and ready quality of their construction, they have the same symbolic, archetypal anthropomorphic forms as his flat symbolic paintings. The paintings are influenced by Paul Klee’s work and mix the flatness of Egyptian or Mayan writing with the crudity of the late black paintings by Jackson Pollock. The sculptures are often reminiscent of the stone heads of Easter Island and other Oceanic art.

For the French winery Château Siran, one of the nine wineries of the classification Crus Bordeaux Exceptionnels, he designed the label for the wine vintage 1989, the year in which the Berlin Wall fell.

On 12 November 2005, the sculpture The Heavenly Stürzer (a five-piece marble ensemble), which Penck had created in collaboration with Frank Breidenbruch and whose value was probably several hundred thousand euros, damaged by the ghost ride of a driverless excavator. The sculpture was inaugurated on November 13, 1996 in Wuppertal.

Penck was never fixated on painting alone. He wrote poems, essays and theoretical texts. Even as a jazz musician (vocals, drums, double bass, guitar, flute and piano) he appeared and released phonograms, which he provided with their own cover motifs.

A.R. Penck lived and worked in Berlin, Düsseldorf, Dublin and New York. He died in Zurich on May, 2, 2017 recently and we will miss him a lot at the gallery.